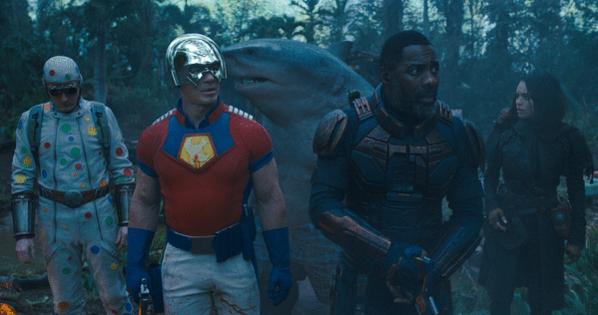 The actors are two of the big additions to DC Comics’ latest movie about supervillains tasked with coming together to save the world.

Complicating the high-stakes mission is a bitter rivalry between Elba’s Bloodsport and Cena’s Peacemaker.

“Every member of Suicide Squad is chosen for their unique talents,” Cena told the Daily News. “Every member is different. ... Everyone has definable skills, except for Peacemaker and Bloodsport. They’re identical. Damn near identical, so in a way, you have that alpha-male struggle.

“Idris is great, because as animated and over-the-top as I am, he is so snarky. ... Not only are we identical skills, but we’re opposite personalities.”

Out Aug. 6 in theaters and on HBO Max, “The Suicide Squad” introduces a ragtag group of inmates who are offered reduced prison sentences if they can successfully defuse an international conspiracy.

Elba’s Bloodsport is a reluctant leader who boasts an assassinlike skill set and an affinity for weapons. The similarly combative Peacemaker is obsessed with bringing peace, even if it means unleashing unbridled violence to get it.

The movie serves as a stand-alone sequel to 2016′s “Suicide Squad” and features a mostly new cast, with Margot Robbie returning as the crazed Harley Quinn and Joel Kinnaman back as field leader Rick Flag.

It’s written and directed by James Gunn — who also helms Marvel’s “Guardians of the Galaxy” movies — and features a blend of raucous humor, action-packed violence and emotional substance.

“You can expect a spectacle,” Elba, 48, told The News. “You can expect lots of drama and action moments, but also heart and humor. There’s a new cast to this franchise — with Margot Robbie, and [Kinnaman] in the central position — which really brings a new life to the Suicide Squad family.”

Mayam Bialik is shedding some light on her “dreamy” new job.

The actress, director and neuroscientist was recently announced as a host of “Jeopardy!” following the ouster of the popular game show’s former host ...Read More

Yes, there's a starling in "The Starling." The lil devil decides to nest at the home of Lilly Maynard (Melissa McCarthy), who already has plenty on her mind without having to worry about an insanely territorial bird. But ...Read More

NEW YORK — Movie magic is back in the Big Apple with the New York Film Festival’s return to the Lincoln Center.

It doesn't take more than a glance to come up with a few obvious connections between "Dear Evan Hansen" and "The Perks of Being a Wallflower." Both are high school dramas about troubled teens trying to overcome social ...Read More

CHICAGO — When Mike Houlihan, that local whirlwind of creative energy as writer, actor and radio host, started the first Irish American film festival years ago, he did so in part to find a home for his own movie, a ...Read More