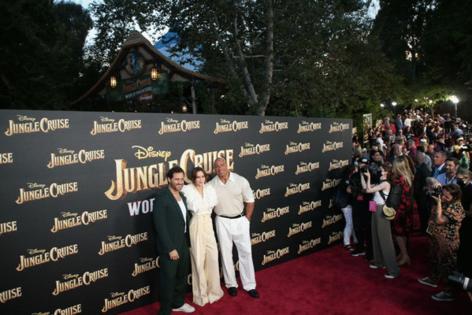 Dwayne “The Rock” Johnson and Emily Blunt followed very different paths to get to “Jungle Cruise.”

Johnson didn’t hesitate when he was first approached about making a fantasy-adventure movie based on the longtime boat ride at Disney’s theme parks.

“The script was in a really good place, and I immediately just saw the potential of the opportunity,” Johnson, 49, said during a press conference Monday.

“That opportunity was to take a beloved and iconic Disney ride since 1955, when the park opened — this was Walt Disney’s baby. There were a lot of elements that I felt comfortable with saying yes, I will come on board, I’ll partner with you guys.”

Once Johnson joined, he recorded a video for Blunt in hopes of recruiting her as his co-star, saying, “Emily, you are the only one who can do this movie.” She didn’t exactly jump at the chance, he joked.

“I just needed to back it up a little bit, and I needed to read the script,” Blunt, 38, deadpanned.

Ultimately, the duo teamed up for the twist-filled flick, which cruises into theaters and on Disney+ Premier Access Friday.

Blunt plays Lily Houghton, a botanist driven to find a mythical entity with extraordinary healing powers that’s rumored to exist deep in the jungle. Johnson portrays the pun-loving Frank, a skilled steamboat skipper who agrees to guide Lily and her brother McGregor, played by Jack Whitehall, on their quest.

Set a century ago, “Jungle Cruise” sees the characters encounter daunting dangers and supernatural scares as they venture into the jungle — while grappling with a ruthless prince, portrayed by Jesse Plemons, who’s after the same prize.

The goal was to create a movie that captured the magic of classic adventure films like “Indiana Jones” and “Romancing the Stone,” Blunt said.