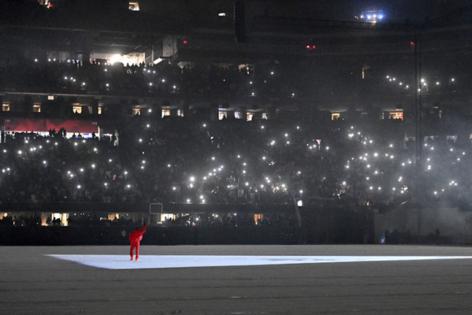 Kanye West is reportedly living inside Atlanta’s Mercedes-Benz Stadium after hosting a listening party for his forthcoming album, “Donda,” at the venue last week.

According to TMZ, the rapper has since moved into the concert destination, where his team has set up living space, a recording studio and a personal chef for West as he completes his highly anticipated 10th studio album.

A rep for West did not immediately respond Monday to the Los Angeles Times’ request for confirmation.

On Saturday, the “Stronger” hit-maker was photographed attending an Atlanta United soccer game at the stadium, donning the same fire-engine red coat and tinted ski mask he wore during his Thursday performance. The perplexing images left some wondering why West seemed to stay in the same location (and outfit?) since premiering his new music.

On Thursday, the “Heartless” artist debuted more than a dozen tracks off his latest album, which is tentatively set for a delayed Aug. 6 release, TMZ reported.

The show, which was livestreamed on Apple Music, included several songs addressing his ongoing divorce from mega-influencer Kim Kardashian, with whom he shares four young children.

Kardashian and the kids were reportedly present at Mercedes-Benz Stadium for the preview of “Donda,” which features collaborations with a number of West’s peers, including Lil Baby, Pusha T, Playboi Carti, Roddy Ricch, Travis Scott and even on-again-off-again pal Jay-Z.

Originally scheduled to launch on streaming last week, “Donda” is named after West’s mother, who died in 2007 following complications from surgery. Her voice is sampled on the album via spoken-word interludes musing on her son’s larger-than-life legacy and the power of unconditional love.

The upcoming release of “Donda” comes about two years after West’s most recent studio effort, “Jesus Is King,” which debuted atop Billboard’s 200, rap and gospel album charts and took home the 2021 Grammy for contemporary Christian album.

In addition to building on his public religious awakening, “Donda” also references the emcee’s controversial support of former President Donald Trump. (One lyric from Jay-Z advises West to “stop all of that red cap,” referring to the infamous merch worn by Trump’s supporters.)

TMZ did not specify whether West will be adding new tracks to the album following his Atlanta residency, or if he is simply putting finishing touches on the tunes he teased last week.