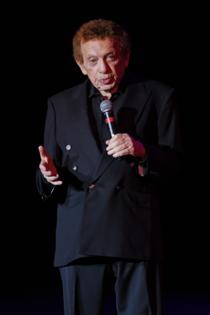 Mason was born Yacov Moishe Maza in Sheboygan, Wis. When he was 5, his family moved to Manhattan’s Lower East Side, then a Jewish neighborhood. He graduated from City College, and considered New York his hometown.

Mason was the son, grandson, great grandson and great-great grandson of rabbis. He followed their footsteps and was ordained a rabbi at age 25, but gave it up after three years. “Somebody in the family had to make a living,” he cracked.

As a young comic, he gained fame appearing on CBS’ “The Ed Sullivan Show,” which in the 1960s was a family TV staple. One night in 1964, Mason got into trouble when Sullivan held up two fingers to signal that Mason had two minutes left in his shtick.

Everyone figured Mason’s career was done — but it was only damaged.

Sullivan later apologized, and Mason still turned up on TV — including a 1969 appearance on “The Smothers Brothers Comedy Hour” on CBS. But for most of the two decades after the Sullivan show incident, Mason mainly worked small comedy clubs and Catskills resorts.

His career was fully revived in the 1980s with “The World According to Me,” a smash one-man Broadway show that won a Tony Award and was turned into a TV special and an album.

“Now I am the biggest hit to ever do Broadway,” Mason told The New York Daily News in 1999. “I love playing there because the audiences are so respectful. They’re all friends of mine. Really. I feel that way. So I tell them some jokes for a couple of hours and everybody laughs and has a good time. It’s pure entertainment. Nothing else.”

He turned his enjoyment of success into a joke. “Money is not the most important thing in the world. Love is,” he said. “Fortunately, I love money.”

Mason appeared in several movies, including the 1979 Steve Martin comedy “The Jerk” and “Caddyshack II” in 1988. On “The Simpsons,” Mason voiced Krusty the Clown’s father, who was a rabbi.

He briefly made headlines in 2012 when an early morning lovers’ quarrel left his girlfriend in handcuffs. The charges against her were eventually dropped.

Mason was a staunch defender of Israel, and generated controversy in 2015 by slamming what he thought was President Barack Obama’s sympathy to the Palestinian cause. “How often have you heard him say, ‘We have to do something because we have to put a stop to Hamas’ aggressions? To Hamas bombing Israel every day?’ " he said.

He was also one of the few entertainers to support former President Donald Trump, who he called a “bombastic powerhouse” and a “colorful, dynamic character.”

Information about survivors and funeral services was not immediately available on Saturday.