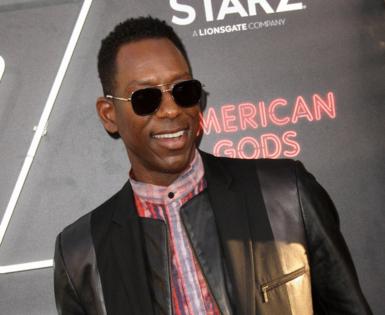 American Gods will live on, or at least one of them.

Neil Gaiman’s beloved 2005 fantasy novel “Anansi Boys” will be made into a series.

Amazon has ordered a six-episode series revolving around Mr. Nancy, which was portrayed by Orlando Jones in the since-canceled Starz series “American Gods,” based on the prolific British author’s international best-seller of the same name.

“Anansi Boys” follows Charlie Nancy, a young man who is used to being embarrassed by his estranged father. But when his father dies, Charlie discovers that his father was Anansi: trickster god of stories. And he learns that he has a brother. Now his brother, Spider, is entering Charlie’s life, determined to make it more interesting, but also making it a lot more dangerous.

The streaming platform noted that “Anansi Boys” will tell a stand-alone story and pointed out that it was “not a sequel or spin-off.”

“‘Anansi Boys’ began around 1996, from a conversation I had with Lenny Henry about writing a story that was diverse and part of the culture that we both loved,” Gaiman said. “I wrote a novel, an (I hope) joyous and funny book about a dead god and his two sons, about birds and ghosts and beasts and cops, based in Caribbean and African tales. It was my first number one NYT Bestseller, and went on to become a beloved and award-winning book.”

“‘Anansi Boys’ as a TV series has been a long time coming. I first started working with Endor and Red on making it over a decade ago,” he added. “We needed Amazon Prime to come on board and embrace our vision.”

Already equipped with an overall deal with Amazon, Gaiman will reunite on the project with “Good Omens” director Douglas Mackinnon as co-showrunners.

Sir Lenworth George Henry aka actor Lenny Henry — who narrated an audiobook and has voiced Spider and Anansi in BBC radio productions — has been tapped to serve a writer and executive producer on the forthcoming series.

“I’ve been a huge fan (and couch sleeping friend) of Neil Gaiman’s for over 30 years and I have loved being a part of the Anansi Boys creative team,” Henry said. “I love that we’re going to have a suitably diverse cast and crew to tell this joyous story! What’s great is that the whole production is listening and ensuring that inclusion is happening and is being seen to be done.”

Centering on the convergence of theological, mythical and psychological deities waging a war in modern times, “American Gods” aired for three seasons on Starz before being abruptly canceled in March.

Jones as the bespoke trickster Mr. Nancy (aka Anansi) became a fan favorite. The former “Mad TV” star and 7Up pitchman — who contributed writing amid the troubled second season of the Fremantle-produced series — said he was fired from the series after producer Charles “Chic” Eglee (Dexter) decided his character was sending the “wrong message for Black America.”

Jones also implicated British television production company Fremantle in his gripe. Amazon noted that the studio, also behind “America;s Got Talent,” “The X Factor” and “Family Feud,” is not involved in the new series.

Though he credited social media fanfare for getting him the gig, Jones reportedly is not going to take on the role of Mr. Nancy in “Anansi Boys.”

No information on the timetable of “Anansi Boys” but the streaming service did confirm that production will begin this year in Scotland.

For months, that's the code name Britney Spears fans have used to refer to a secretive documentary on the pop star believed to be in the works at Netflix. The rumor began after the performer began making ...Read More

If you thought the original "Night of the Living Dead" was too slow and not gory enough, Warner Bros. Home Entertainment has a movie for you.

"Night of the Animated Dead" is an almost shot-for-shot cartoon remake of ...Read More

A few days after his WWE contract expired, Adam Cole was lying in bed at 1 a.m., trying to figure out what to do next.

LOS ANGELES — Patricia Cardoso's eyes brim with tears, and she says she might cry. Tucked inside a Zoom box against the backdrop of a white-walled office, she knits her brow, bites her lip and takes a deep breath before ...Read More

A year later than planned, Judas Priest has finally embarked on its "50 Heavy Metal Years" tour. Let the headbanging commence.

Guitarist Richie Faulkner says the tour celebrates the band's history, its music, and its ...Read More