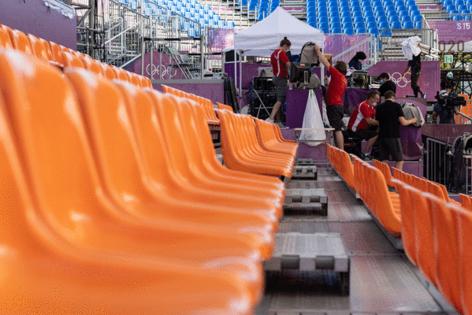 The troubled, pandemic-delayed Tokyo Olympics finally get under way this week, but without fans in the stands, will the global sports showcase still make for must-see TV?

Anxious NBC executives are surely breaking out in rivers of flop sweat.

COVID-19 cases are on the rise in Tokyo, and the games, postponed last year because of coronavirus fears, will be held in mostly empty venues to minimize health risks. Japanese Prime Minister Yoshihide Suga recently announced that a state of emergency will remain in place through the Olympics.

That’s a huge letdown for NBCUniversal, which spends billions for exclusive broadcast rights and counts on images of exuberant, flag-waving, fist-pumping spectators to amp up the excitement among viewers watching from home. No amount of cardboard cutouts, or piped-in crowd noise, can replace that kind of juice.

Adding to the disappointment is the jarring reality that many Japanese citizens believe the Olympics should just be canceled. Talk about a buzzkill. (As for Americans, a CBS News poll in late June revealed that a majority of Americans want the Games to go on.)

Still, NBC is going all in. The company plans to capture all the action — from aquatics to wrestling — with more than 7,000 hours of coverage across two broadcast networks (NBC and Telemundo), six cable channels (USA, CNBC, NBCSN, Olympic Channel, Golf Channel and Universo) and multiple digital platforms, including the year-old streaming service, Peacock.

Things get rolling in earnest with the opening ceremony on Friday, and because of the vast time difference between Japan and the U.S., NBC will broadcast the festivities live in the morning for the first time ever.

For bleary-eyed American diehards, that means a 7 a.m. ET wake-up call. If that’s too daunting, you can stick with the network’s traditional prime-time broadcast on Friday night. It will feature special coverage of Team USA, along with the prerecorded performances, pageantry and Parade of Nations.

And then, from Friday through Aug. 8, it will be a relentless onslaught of Olympics programming. Plan on spending lots of face time with Mike Tirico, NBC’s in-studio Olympics host.

But what we’ll undoubtedly miss are live audiences and the feel-good vibes they provide.