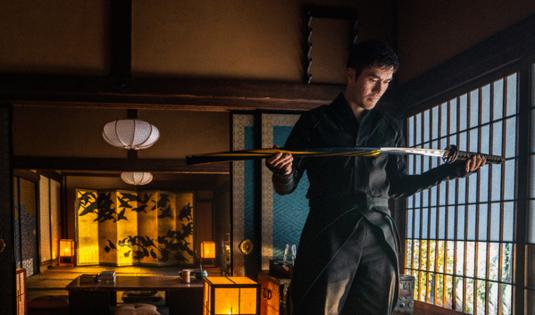 If we are to believe "Snake Eyes," the must-have fashion accessory for Summer 2021 is a sword.

Everybody in both Los Angeles and Tokyo seems to have one in the action movie, which is subtitled "G.I. Joe Origins" even though there are no G.I.s in it and there's nobody named Joe and the title makes it unclear whether we're talking about Joe's origins or Snake Eyes' and probably not that many people care about either.

The origins are Snake Eyes' (Henry Golding), by the way. In the opening scene, we learn he earned his nickname when, as a child, he saw mercenaries kill his father after an unlucky dice roll. That was 20 years before the events of the movie, which picks up with Snake Eyes vowing to kill the man who murdered his dad.

That puts him in cahoots with a yakuza clan he helps do a little turf-protecting in Japan but, for much of the movie, we're not sure whether he's working for or against them. It's also not clear what the deal is with the movie's MacGuffin, "Jewel of the Sun," a gaudy, much-sought-after rock whose possessor can control the universe or something.

There's lots of hand-to-hand — and foot-to-face — combat in "Snake Eyes." Choreographed by Kenji Tanigaki, it's spectacular stuff, sometimes involving those swords, as well as daggers and improbably high jumps. Although nearly everyone in "Snake Eyes" is of Asian descent, the film takes a diverse approach to casting its warriors, who come in many genders, abilities and ages.

All seem to have taken the same Whisper Acting course at the Clint Eastwood Academy of Dramatic Arts (that's probably director Robert Schwentke's doing) but each fighter has a distinctive style that emerges in Tanigaki's inventive, graceful movement.

Perhaps Tanigaki should have directed the whole movie. Schwentke keeps things moving but doesn't seem to know how to stage complicated scenes. One, in which someone announces "This is a terrible idea" before driving a car off a moving truck, doesn't have much impact because Schwentke doesn't take enough time to set up what's going on in the scene and who's doing it.

Golding has been a stiff in rom-coms such as "Last Christmas" (to be fair, it was dreadful). But he nails the combo of authority and low-key humor that the title role asks for, suggesting that after using two different actors to play Snake Eyes in the previous two "G.I. Joe" movies, they finally found their man.