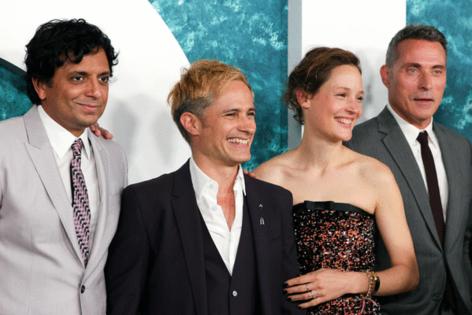 Watching “Old” will take about four years off your life — or just under two hours, depending on which way you’re reading your trusty temporal-wormhole conversion chart. The movie, you see, follows a group of unfortunate vacationers who get stuck on a private beach, where they fall victim to an alarming, irreversible, inexplicable process of accelerated aging. Did I say inexplicable? How silly of me. This is a thriller written and directed by M. Night Shyamalan, after all, which means there’s always an explanation or two or 200. It’s a wonder he isn’t still explaining it as the credits roll.

By the time they do, you may find yourself both exasperated and tickled by what you’ve seen: a gleaming slab of high-end, high-concept summer trash that really does play strange games with your perceptions and maybe even your tastes. “Old” grabs you right away, starts losing you at the half-hour mark, pulls you back in with some agreeably bonkers set-pieces, drags you through a tedious closing stretch and finally leaves you in an oddly charitable mood: Say, that wasn’t so bad, except when it was terrible. It’s no small accomplishment. Some Shyamalan films can take years to start looking better with age (see: “The Village,” or maybe don’t), but “Old” pulls it off in record time.

That’s a good thing, since the clock is already ticking for Prisca (Vicky Krieps) and Guy (Gael Garcia Bernal), the attractive, unhappily married couple we see arriving at a tropical island resort in the opening scenes. They’re calling it quits and taking one last family vacation together with their kids, Maddox (Alexa Swinton) and Trent (Nolan River), who are 11 and 6, but not for long. Everyone’s too distracted to notice the faintly creepy vibes at the resort, one of those all-inclusive getaways with stunning ocean views, personalized cocktails on arrival and a van (driven by Shyamalan himself, in one of his more prominent signature on screen roles) that will chauffeur specially hand-selected guests to a secret cove on another side of the island.

It’s here that Guy, Prisca and the kids find themselves one afternoon, along with several other guests. While they have names, it may be best to identify each of them by the occupation and/or single personality trait that Shyamalan has saddled them with: There’s a rude doctor (Rufus Sewell), his beauty-obsessed wife (Abbey Lee), their cute daughter (Kylie Begley) and her sweet grandmother (Kathleen Chalfant). There’s a soulful rapper (Aaron Pierre), a helpful nurse (Ken Leung) and his perhaps over-helpful psychiatrist wife (Nikki Amuka-Bird). And then there’s the corpse that washes up that afternoon, the first sign that something on this beach is very, very wrong.

More signs follow. A small tumor inflates to the size of a grapefruit within seconds. Digitally rendered wrinkles appear on the older travelers’ faces, while cuts and wounds heal with alarming rapidity. Maddox and Trent are suddenly recast with older actors (Thomasin McKenzie and Luca Faustino Rodriguez), like wee moppets suddenly morphing into angsty teens on “Days of Our Lives.” As you’d expect and perhaps even want from a slasher movie where Time itself is wielding the sickle, the body count escalates fast. They’ll all be dead within days or even hours, they realize, and whenever they try to leave — to exit through the surrounding caves or swim past the heavy currents — the beach has an unnerving way of yanking them back.

And “Old,” adapted from Pierre Oscar Levy and Frederik Peeters’ graphic novel “Sandcastle,” is just getting started. How to describe the long, noisy, stabby, increasingly unhinged passages that follow? “Gilligan’s Island” as reimagined by Luis Bunuel? Ed Wood’s “L’Avventura”? “The Curious Case of Benjamin Beach Bum”? I’m spitballing here, and so, on some level, is Shyamalan. Burrowing into the outlandish biomedical implications of his premise, he pulls off one or two amusingly grisly sequences, at least one of which suggests that even premature aging has its undeniable uses. He steeps his characters in a familiar, quintessentially Shyamalanian fog of panic and paranoia, in which they struggle to believe, let alone explain, the extraordinary phenomena transpiring before their eyes.

What he doesn’t do is come close to generating so much as a flurry of real suspense or terror — a failing that can be chalked up to the surprising ineptitude of the filmmaking. This is dispiriting to report, given that Shyamalan’s undersung signature as a storyteller has always been his superior eye, his skill at patiently building tension and suspense inside the frame. Even when he loses his narrative way or gets bogged down in metaphysical portent, his visual command seldom abandons him.

Until now. Shyamalan seems weirdly at a loss for how to stage action in this confined yet open space, and his actors are often left standing around in stiff, awkward formations. (The fast-mutating ensemble also includes Embeth Davidtz, Emun Elliott, Alex Wolff, Eliza Scanlen and Mikaya Fisher.) The camera lurches around these sandy minimalist environs, whipping up flurries of psychodrama but never quite finding the ideal placement. The dialogue is even clumsier, all forehead-smacking exposition (“Our cells are aging very fast here!” “The dog’s dead!”) in a script that tends to tell twice as much as it shows. In trying to capture a group state of mental and physiological freefall, the filmmaker merely exposes the limits of his own control.

So why, in spite of all that, does “Old” still inspire a spasm of retroactive goodwill? Maybe because after the murky, misbegotten “Glass,” it’s nice to see Shyamalan doing a deranged one-off, taking the movie equivalent of an invigorating stroll in the sun. Maybe because the story concludes not with a shocking, credulity-straining twist, but rather an explanation that, in light of all that has preceded it, feels curiously coherent, even intuitive. Maybe because of the wondrous Vicky Krieps, whose lovely, breathy understatement finds expressive notes that few of her co-stars can match. (Look out for her in the upcoming “Bergman Island,” a vastly superior movie about an estranged couple on an island where reality begins to blur.)

Or maybe it’s just that “Old,” a story of collective bodily breakdown arriving in the midst of a pandemic, builds to an obvious but appreciably stirring note. It acknowledges the reality of just how quickly time passes and how cruelly loved ones can be ripped away. Maybe it’s true that life is too short for bad movies. Or maybe it’s too short not to take what pleasure in them you can.