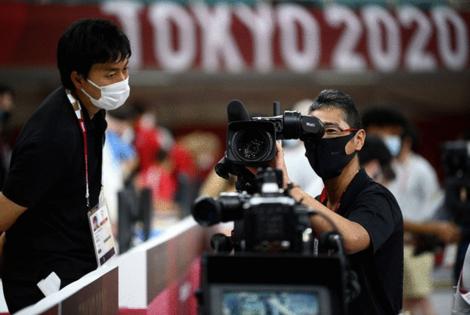 Most broadcasters reporting on the upcoming Tokyo Games will have something in common with TV viewers: They'll be watching the action from thousands of miles away.

Of the more than 175 commentators assigned to cover the competition for NBC, roughly the same number who were in Rio for the 2016 Olympics, only 75 will actually be in Japan. The rest will conduct interviews, offer play-by-play analysis and try to capture the excitement without ever having to pull out their passports.

It's not as daunting as it sounds.

NBC Sports reporter Randy Moss, a Minnesota resident since 2008, made it to London for the 2012 Games. But he spent most of his airtime working out of a studio outside the sporting venues, relying on a bank of TV monitors to keep him up to date on several events at once.

"At one point I thought I could actually be doing this from my living room in Prior Lake — and much more cheaply," said Moss, who is not to be confused with the former NFL receiver.

This time around, Moss will cover equestrian events from a Connecticut studio. His colleague Kerith Burke will report out of Universal Resorts in Orlando, Florida, where NBC and the U.S. Olympic & Paralympic Committee are throwing a two-week viewing party for families of American athletes.

"We're hoping for some spontaneous chants of 'USA! USA!,' " said executive producer Molly Solomon, who will supervise more than 7,000 hours of coverage on various NBC platforms, including Peacock, CNBC and the USA Network.

When U.S. athletes win medals, NBC hopes to connect them immediately via satellite with family members and friends, some of whom are going the extra mile to show their support.

The network will pop in on the father of BMX world champion Hannah Roberts, who has set up a giant screen in an outdoor park in Buchanan, Mich., and crash a sleepover for young gymnasts at Simone Biles' home gym in Texas.

"Due to COVID protocols, we recently made the decision to stay in the U.S. and continue our coverage in our local communities," said Larry Delia, senior vice president of media operations for TEGNA, which owns KARE 11, the Twin Cities NBC affiliate. "We're focusing on all of the human-interest stories related to the athletes, and watching along with their families and communities during the competition."