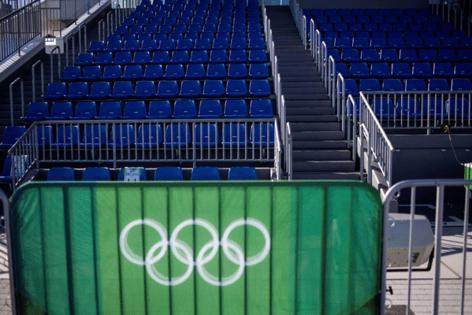 NBC and its affiliate cable networks and streaming channels will air more than 7,000 hours of Olympic coverage out of Japan, some live, some tape delayed.

You'll be able to find coverage of 34 different sports competitions not just on NBC proper but on CNBC, Golf Channel, NBC Olympics, NBC Sports Network, Telemundo and USA on cable. Online, there will be streaming options on Peacock, NBCOlympics.com and NBCSports.com. Peacock will offer all its Olympics coverage — including soccer, swimming and gymnastics — for free except for men's basketball.

Tokyo is 13 hours ahead of the East Coast. That means it will be evening in the U.S. when Japan airs live morning events and vice versa.

The NBC prime-time schedule airing locally will be filled with events primarily on tape delay, while throwing in some late-night and early-morning coverage. Sports to be featured during the prime-time evening hours will include volleyball, beach volleyball, swimming, track and field and basketball.

USA, NBCSN and CNBC will offer a variety of live and taped events. Golf Channel will air all of the golfing competition while the Olympic Channel will be the primary home for tennis and wrestling.

There will be four new sports featured: competitive skateboarding, surfing, karate and sports climbing. Baseball and softball are back as well, though they are not slated for the 2024 Paris Olympics.

The opening ceremony will be livestreamed beginning at 6:55 a.m. ET Friday, and will air in prime-time on NBC beginning at 7:30 p.m. that night. The Olympics will continue through Sunday, Aug. 8. — Here is the complete schedule by sport and event: