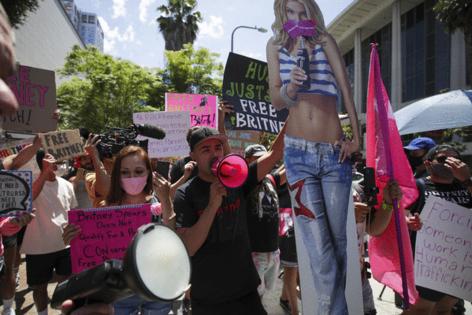 The proposed bill, dubbed the FREE Act, would offer an “escape hatch out of abusive guardianships” by allowing subjects to have their private guardian, called a conservator in some states, replaced with an independent public guardian without having to prove misconduct or abuse.

In the case of Spears, she’s asking a Los Angeles judge to remove her dad from his position as conservator of her $60 million estate, a position he’s been reluctant to give up despite public calls from his daughter to resign.

“Under the FREE Act, we would Free Britney along with the countless number of seniors and persons with disabilities being abused and exploited by the broken system,” Crist said in a statement.

“Conservatorships undoubtedly protect countless vulnerable Americans from abuse, but the case of Britney Spears reveals a darker side to a system meant to protect people,” Mace said.

“In some cases, conservatorships can rob capable and innocent Americans of their money, careers, and even basic human rights, like the right to reproduce in Spears case. To see a woman like Britney Spears have her most basic human rights permanently stripped away from her under the guise of ‘protection’ should be illegal.”

The bill also would assign conservatees their own independent case workers, enforce financial disclosures to safeguard against conflicts of interest and require states to provide a real-time database of the number of people under court-ordered guardianships.

Spears, 39, has been under a court-ordered conservatorship since 2008 after she was involuntarily hospitalized for mental health concerns amid a child custody battle with ex-husband Kevin Federline.