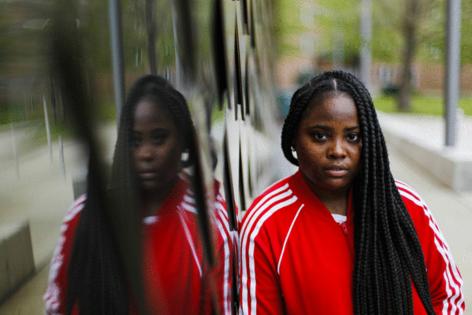 CHICAGO — Posing for photographs on the grounds of the Dearborn Homes development, Dreyana Grooms is approached by a building maintenance worker who wants to let her know police have been towing cars from the lot where she parked.

“I ain’t stressed,” says Grooms. “I’m comfortable. This is where I’m from.”

She suggests a photo on the steps of the neighboring public school, overlooking a playground and baseball field.

Grooms’ childhood ended, though, when she was charged with murder as an adult at age 16, right at the beginning of her sophomore year at DuSable High School. The story of that crime and that trial — and of the Logan Square filmmaker she met after the end of the trial — is the reason she is here on this bright spring morning, a 22-year-old expecting she’ll be watching lightly fictionalized chapters of her life get filmed around Chicago this summer.

Her car, it turns out, will be fine: no ticket, no tow. And the film project has been looking more and more like it will be fine, too. In the course of the spring, the funding necessary to get it made climbed to well over halfway to the target, says Gabe Klinger, the film’s director and Grooms’ writing partner, friend and mentor.

More is still needed, but “we’re in the home stretch,” says Klinger, planning to start shooting their “scrappy little indie” in August. Rayven Symone Ferrell (”All Eyez on Me”) is signed to play Grooms, Wunmi Mosaku (”Lovecraft Country”) her mother, and John Ortiz (”Silver Linings Playbook”) her lawyer, known as Bow Tie.

They want it to be an unconventional film treating urban street life, one that isn’t so much about uplift or redemption as about hard realities.