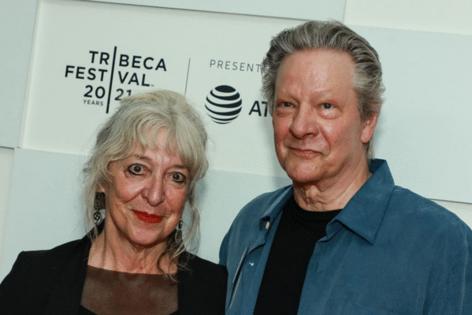 We all went a little nuts in quarantine.

The short film “Nuts,” an entry in the two-part star-studded COVID anthology film “With/In” and Chris Cooper’s directorial debut, builds off that premise.

The Oscar winner (”Adaptation”) and real-life wife Marianne Leone, who penned the script, star as a pair brought together by the dog they share custody of and frequently interrupted by the reality of coronavirus and Claire’s misophonia, in which particular sounds elicit certain emotional or physiological responses.

“Nuts,” which screened June 14 at the Tribeca Festival, marks the first time Cooper and Leone, both 69, have worked together since before they married in 1983.

“We ended up having a lot of fun doing it,” the “Sopranos” actress told the Daily News over Zoom last week. “There were moments of extreme fear but [chuckles] for the most part it was totally fine.”

The “August: Osage County” star wasn’t entirely on board when producer Celine Rattray (”The Kids Are All Right” and “American Honey”) first recruited the couple for the film, which also stars Julianne Moore, Don Cheadle, Rosie Perez, and more.

Not having much else to do in quarantine though, Leone insisted.

“I didn’t have to direct Marianne at all,” Cooper told The News on that call. “To my mind, we were just playing ourselves, and the closest thing I’ve ever come to playing myself.”

Aspects of Leone’s character were real as well, including the misophonia, which she says she has “but not to that extent where it’s like [groans].”

The “American Beauty” actor acknowledged that inviting viewers into the couple’s real-life home, where the film was shot, was “very” odd.