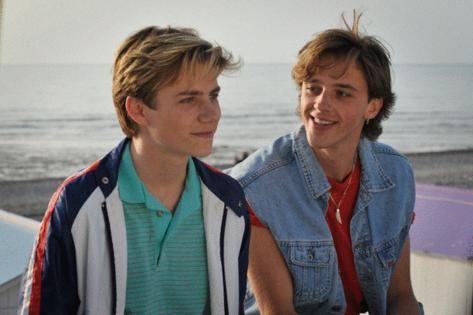 The tide turns quickly and with often startling force in "Summer of 85," a muddled, moving tale of love and death from the French writer-director Francois Ozon. It begins in shadowy gloom, with much frenzied chatter about madness and corpses, then shifts to a sunny stretch of Normandy coastline where Alexis (Felix Lefebvre), the movie's 16-year-old protagonist and narrator, rides his bicycle into view.

It's an idyllic day, but before long things take another sharp turn, as Alexis, aka Alex, sets out in a sailboat that capsizes in an unexpected storm. He's rescued by an 18-year-old sailor, David (Benjamin Voisin), who has an easygoing manner, a killer smile and a sense of timing so adroit, you might suspect he brought the storm with him.

In a way, he has: While the bad weather soon subsides, Alex's personal tempest has just begun. David's seduction is swift and merciless. A flurry of dreamily heightened, disco-hued scenes whisk us from a cinema balcony to a roller coaster to a jam-packed dance floor, where Alex and David sway to the cheesy pop bliss-out of Rod Stewart's "Sailing." Their most intimate moments transpire at the home David shares with his guileless mother (Valeria Bruni Tedeschi, piercingly good), who embraces Alex almost as intently as her son does. But for pure exhilaration, nothing beats the boys' high-speed motorcycle rides, as Alex hangs on for dear life while David weaves in and out of lanes with death-defying abandon.

The specter of death looms heavily over "Summer of 85." David's daredevil attitude, his determination to embrace each moment as if it were his last, may be a defiant response to his father's recent untimely demise. Alex, for his part, has a fascination with mortality that sometimes creeps into the stories he writes for his literature class — a creative outlet that complicates his sense of what he wants to do with his life. While his working-class parents (Isabelle Nanty and Laurent Fernandez) quietly fret over his future, all Alex knows for certain is that he's passionately, obsessively in love with David, who reciprocates for a while until, in a shattering confrontation, he doesn't.

The two leads are so well cast — Voisin makes a supremely fickle object of desire, while the fresh-faced Lefebvre is the very picture of thwarted longing — that you can all but see the story's outcome etched in their faces. That story was adapted from Aidan Chambers' 1982 young-adult novel, "Dance on My Grave," a playfully structured tale that restlessly circles its life-altering tragedy. No stranger to puzzle-box narratives, Ozon translates the book's layered perspectives and shifting time frames in mostly straightforward fashion (with precise contributions from Hichame Alaouie's cinematography and Laure Gardette's editing). The movie toggles restlessly between the romantic highs of Alex's past and the inconsolable misery of his present — a present from which David is conspicuously absent.

There are a few meta-fictional fillips — are we witnessing reality, or lost in a narrative of Alex's own unreliable construction? — but for the most part, the filmmaker's tone feels disarmingly, even clumsily sincere. And also, for all the story's darker turns, curiously hopeful. Ozon was a teenager himself when he first read "Dance on My Grave," which generated acclaim and controversy as a rare '80s book that didn't punish its youthful characters for their homosexuality.

In "Summer of 85," he attempts to bridge a gap that spans several decades, to revisit his youthful impressions of the material from an older, ostensibly wiser perspective. He also conjures something that feels like '80s nostalgia — whose fashions, hairstyles and music are always a reliable source of cinematic pleasure — without abandoning the present tense.

As Ozon has noted in interviews, this particular journey has taken its own strange metafictional turns, given how much "Dance on My Grave" seems to anticipate key themes and plot devices from the director's other movies. "Summer of 85" has the matter-of-fact sensuality and youthful focus of so many of Ozon's earlier films, but it's also a startlingly specific greatest-hits compilation from across the director's tirelessly productive career. When a fit of desperation pushes Alex to don women's clothes, you might flash back on Ozon's "The New Girlfriend," just as Alex's relationship with his writing teacher (a deliciously skeevy Melvil Poupaud) recalls the literary contortions of "In the House." No less than Alex himself, Ozon has long had something of a death fixation, a fascination with dramas of personal grief and loss ("Under the Sand," "Time to Leave," "Frantz") that here achieves a kind of morbid apotheosis.

That relentless pursuit of darkness sometimes pushes the story into realms of emotional extremity that, in Ozon's hands, can feel both passionate and dispassionate, like too much and not enough. (That's especially true when "Summer of 85" arrives at the climactic reckoning, predicated on a bizarre lovers' pact, that gives "Dance on My Grave" its title.)

But amid the movie's arresting, borderline-surreal flourishes, its most affecting moments are those in which Alex, lost in the maelstrom of his grief, finds himself gently pulled back to reality: by a sympathetic friend, Kate (Philippine Velge), who finds herself swept up in his sorrows, and by his parents, who turn out to be more knowing and understanding than he realized. If that sounds like an idealized fiction, it nonetheless feels remarkably close to the truth.

In French and English with English subtitles