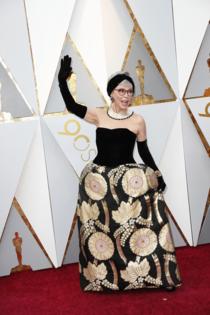 Fewer than 24 hours after the actor staunchly defended “In the Heights” producer Lin-Manuel Miranda against criticism for failing to cast Afro-Latinx talent in lead roles, Moreno apologized Wednesday on social media for her “Late Show” remarks.

“I’m incredibly disappointed with myself,” Moreno, 89, tweeted. “While making a statement in defense of Lin-Manuel Miranda on the Colbert Show last night, I was clearly dismissive of black lives that matter in our Latin community. It is so easy to forget how celebration for some is lament for others.”

The Oscar-winner’s apology comes a few days after Miranda publicly admitted that director Jon M. Chu’s film adaptation of his breakout Broadway musical “fell short” in terms of representing the Afro-Latinx residents of New York City’s Washington Heights, the predominantly Dominican neighborhood where the movie was shot on location.

Miranda is also credited as a cast member and executive producer on “Rita Moreno: Just a Girl Who Decided to Go for It,” the 2021 documentary chronicling its titular subject’s illustrious career.

“In addition to applauding Lin for his wonderful movie version of In The Heights, let me add my appreciation for his sensitivity and resolve to be more inclusive of the Afro-Latino community going forward,” Moreno continued on Twitter. “See, you CAN teach this old dog new tricks.”

When Stephen Colbert asked Moreno earlier this week about the ongoing discourse regarding a lack of Afro-Latinx representation in the movie musical, Moreno wished Miranda’s critics would “wait a while and leave it alone.”

“You can never do it right, it seems,” she said, later adding, “It would be so nice if they hadn’t come up with that and left it alone, just for now. I mean, they’re really attacking the wrong person.”

While discussing “In the Heights” with comedian Trevor Noah on Tuesday’s episode of “The Daily Show,” Miranda expanded on his apology, acknowledging that his “job as an artist is to write what’s missing.”

“All I want is for this neighborhood to feel seen, and if there’s a segment of it that doesn’t feel seen and they’re saying that, you have to acknowledge that and let it in,” Miranda told Noah.

“All I can do is learn from it and promise to do better. And again, there’s so [many] Afro-Latinos in the movie. The beef really was specifically dark-skinned Afro-Latinos in leading roles, in those leading, principal roles and ... I totally understand that, and I receive it and I just have to do better on the next one.”