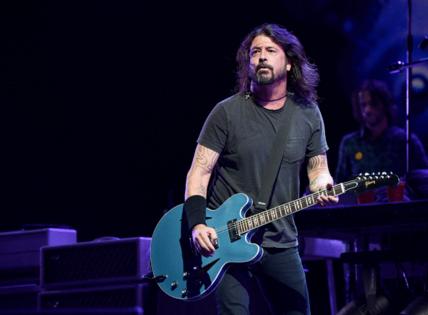 The rock band, fronted by singer and guitarist Dave Grohl, performed at the intimate Canyon Club concert venue to a sold-out crowd of about 600 fans vaccinated against the novel coronavirus.

Unvaccinated community members were not permitted to attend the show, sparking outrage among those who have refused to become immunized against the deadly illness that has taken the lives of at least 600,000 people in the United States.

"Separating humans is not OK," one protester told KCAL News while wielding a sign condemning the vaccination policy as "modern segregation." "Those of us who have healthy immune systems should be able to enjoy these freedoms just like anybody else."

Tickets to the event were distributed over the weekend to fans who were willing to wait in the lengthy queue and prove their vaccination status. According to CBS, the Canyon Club can accommodate up to 600 people at a time.

As seen in video footage of Tuesday's demonstration, an angry mob of picketers brandished posters comparing the vaccination policy to racial segregation during the Jim Crow era and calling the Foo Fighters "farma sellouts" — presumably an alliterative play on words referencing the pharmaceutical industry.

Some hoisted signs spreading misinformation and baseless conspiracy theories about the COVID-19 vaccine. As of Wednesday morning, 56.5% of Californians had received at least one dose of a COVID-19 vaccine and 47.5% were fully vaccinated. In Los Angeles County, where the concert took place, about 66% of people 16 and older have had at least one vaccine dose and 56% are fully vaccinated.

"Because of overwhelming demand for these events, in order to accommodate as many guests as possible, Madison Square Garden is complying with New York State mandates that require all guests to be fully vaccinated in such circumstances," read the Ticketmaster description for the show.

Upon learning of the vaccine requirement, a small but vocal group of disgruntled fans renounced their support for the rock stars and accused them of conforming to the "woke" agenda.

Anti-vaccine grumblings aside, the Madison Square Garden show will go on as planned Sunday night. The Foo Fighters did not immediately respond Wednesday to the LA Times' request for comment.