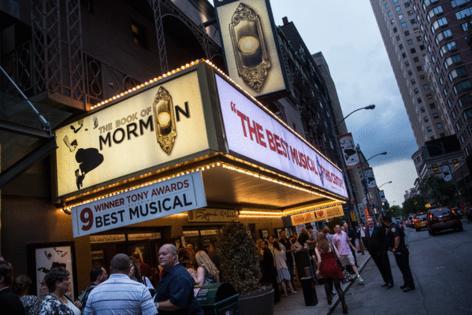 NEW YORK — Prayers have been answered for “The Book of Mormon” fans.

The Tony-winning stage musical will return to Broadway on Nov. 5, producer Anne Garefino announced Wednesday of the raunchy comedy.

Broadway shows have been shuttered since March 2020 due to the COVID-19 pandemic.

“When Broadway shut down, so many amazing and talented people were put out of work, many of whom had become family to us,” said the show’s authors, Trey Parker, Matt Stone and Robert Lopez, in a joint statement Wednesday.

“As writers and as fans we are so ready for the ‘Great Broadway Comeback’ and are so glad that our show can be a part of it. Can’t wait to be back with the entire team and our wonderful cast, crew, and orchestra.”

“The Book of Mormon,” which opened on Broadway in 2011, won nine Tony Awards honors that year, including best musical. The comedy centers on a pair of Latter-day Saints missionaries who are assigned to spread the word of their religion in Uganda.

The show, which also won the Grammy for best musical theater album in 2012, plays at the Eugene O’Neill Theatre.

Fans will have the chance to buy tickets to “The Book of Mormon” beginning June 28.

“The Book of Mormon” becomes the latest high-profile show to announce its Broadway return, with “Hamilton,” “The Lion King” and “Wicked” each set to reopen their doors on Sept. 14.

In addition to co-writing “The Book of Mormon,” Parker and Stone are the creators of the satirical animated comedy series “South Park.”

Wednesday’s announcement also said “The Book of Mormon” will return to London’s West End on Nov. 15, and that a tour will pick up in Cardiff, Wales, on Oct. 12.