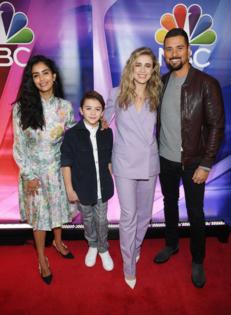 But the supernatural drama about a lost plane is taking flight as Warner Bros. Television tries to find a new home for the fan favorite. (The season three finale of “Manifest” aired last week, and the first two seasons are now streaming on Netflix.)

On Tuesday morning, “Manifest” creator Jeff Rake tweeted, “I’m devastated by NBC’s decision to cancel us. That we’ve been shut down in the middle is a gut punch to say the least. Hoping to find a new home.”

The punch was felt universally as fans, referred to as “Manifesters,” and cast members galvanized a #SaveManifest campaign, which began trending Tuesday on Twitter.

Starring Parveen Kaur, Jack Messina and Melissa Roxburgh, among others, “Manifest” centers around Montego Air Flight 828 and the lives of presumed-dead passengers and crew members who return five years after the plane’s disappearance.

“I have some thoughts but in the meantime... #SaveManifest,” Kaur tweeted after Deadline first reported the cancellation late Monday.

The saga’s sudden end points to how networks’ definition of success, distinguished by same-day viewership, may still be at odds with popularity on streaming services.

The demise of “Manifest” is the latest in a long line of NBC shows that have been on the chopping block, notably “Zoey’s Extraordinary Playlist.” While season three ended on a cliffhanger, the story may never be finished if “Manifest” is unable to land at another network.