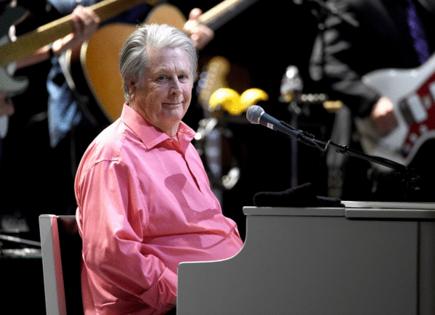 Cranking up the Beach Boys has been a perfect way to add some fun, fun, fun to car rides for 60 years now.

It turns out it’s also a great way to make Brian Wilson open up.

The genius behind America’s Band is the subject of a new documentary, “Long Promised Road,” which debuts Tuesday at the Tribeca Festival.

Wilson, who turns 79 on Sunday, has a treasure trove of classic songs and a lifetime of experiences that are equal parts dream and nightmare, but at times he can clam up during interviews.

So director Brent Wilson — no relation to Brian — shot most of his footage in car rides with Rolling Stone writer Jason Fine, a friend of Brian Wilson who has written about him since the late ‘90s, chatting with the music icon as his tunes played.

“Honestly, aside from a whole bunch of cameras in the car it was really natural because Brian and I have spent a lot of times over the years driving around LA and listening to music and going to eat and driving to Malibu,” Fine said in a Zoom call to promote the film.

“You know that feeling when you’re driving, there’s less pressure. Conversations can start and stop and you can listen to music. Things happen sort of naturally and you’re in that rhythm of the road.”

The film is in stark contrast to the Zoom call, which Brian Wilson was on with Fine and Brent Wilson. In the call, Brian spoke little, leaving the director and journalist to do the heavy lifting.

But in the documentary — riding in a Porsche SUV and not a Little Deuce Coupe — with his songs playing, Wilson spilled some of the details of his remarkable life. It could be painful, such as detailing how his former therapist, Eugene Landy, made him eat spaghetti off the floor, as he controlled every aspect of Wilson’s life throughout much of the ‘80s and into the ‘90s.

“I served time for nine years,” Wilson says in the film, likening Landy’s tenure to a prison sentence.

When Bret Michaels and members of “Rock of Love’s” Season 2 cast traded sweet nothings about their experiences on VH1’s popular reality series for the taping of a post-season postmortem, I’m certain the word “...Read More

Abigail Breslin stars with Matt Damon in the drama “Stillwater,” a fictional story that, at first glance, bears some resemblance to the real life story of Amanda Knox.

The actors are two of the big additions to DC Comics’ latest movie about supervillains tasked with coming together to save the ...Read More

How do you define the blues? Carlos Santana, John Mayer, Kingfish and Gary Clark Jr. answer the question differently in a new documentary, but all agree that one of the genre’s foundations is fellow guitarist Buddy Guy. ...Read More

In “The White Lotus,” Mike White‘s HBO series about the entitled rich in hell in paradise, Jennifer Coolidge plays Tanya McQuoid, who has come to the show’s eponymous tropical resort to scatter her mother’s ashes...Read More

Ann Defrasnoux is an opera singer. Henry McHenry is a stand-up comic. Their whirlwind romance, much like the weird and wondrous movie in which it unfolds, is a reminder that tragedy and comedy often make intimate ...Read More