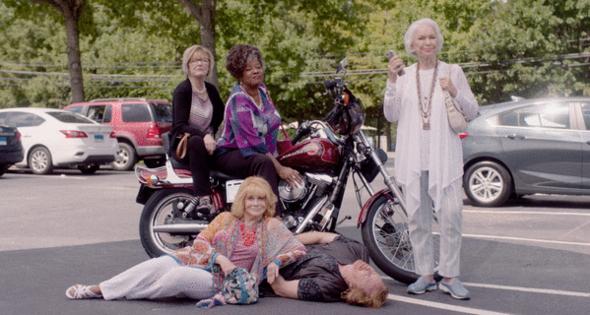 Actress Ellen Burstyn learns as much in Michael Lembeck’s “Queen Bees,” playing now in theaters and on demand, in the role of a widow who begrudgingly (and temporarily) relocates to a retirement community while her home is being repaired.

“I’m 88, so it’s not like there are a lot of films written for actresses who are 88,” Burstyn laughed during an interview with the Daily News. “Now, of course, I’m not 88 in the film. ... And there are very few films written or being produced for characters like” those in the film.

The “Alice Doesn’t Live Here Anymore” star said prior to the project, she’d never imagined a retirement home experience like the one featured in the film.

“Relationships get formed, love affairs happen. They have lots of activities. And I was very impressed. I must say [the film] changed my view of what a retirement home is. So I hope it does that for the audience too,” said the rare Triple Crown of Acting title holder – Burstyn has taken home an Oscar, two Primetime Emmys and a Tony.

“I think whenever there’s a situation where groups are formed, the same kind of groups get formed at any age,” said the “Pieces of a Woman” actress of the mean-girl dynamic at the story’s start.

That, as well as the antics the residents get up to, is a far cry from what Burstyn imagined life to be in a retirement home.

“I just thought in terms of somebody who resisted going to a retirement home and thought of it kind of the way I thought of it, as, you know, the end of the line. Just… going in and waiting for death to descend.”

The film focuses less on the trials and tribulations of aging than it examines how many of life’s obstacles — romantic, platonic, or just reconciling with the past — are present at every stage. “Queen Bees” devotes itself to shining a light on the things that make life worth living.

It’s “very light and full of love and relationships and friendships,” said Burstyn.

And that’s exactly what audiences need after the last 15 months of the coronavirus pandemic, said Burstyn, praising the movie’s “very uplifting” tone.

“This period we’ve been through, it’s just been so dark and so difficult for the whole country, to say nothing of the rest of the world. It’s time for us to get out now and go to movies and go to the theater and enjoy the sunshine again. So, I feel we provide that,” said the “Requiem for a Dream” star.

Along with hoping people watch the film at a theater — “You don’t laugh the same way that you do with a live audience watching a film” — Burstyn wants “Queen Bees” to remind people they don’t need to stop enjoying life when there’s a certain number of candles on the birthday cake.

“You don’t have to give up on living just because you’re in the later stages of life,” said Burstyn. “You can still have fun and romance and interest in what you’re doing. And I hope it encourages people to think of retirement homes as not retiring from life, you know, but still finding love and finding happiness.”