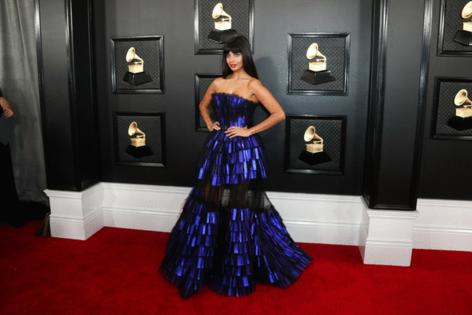 She-Hulk antagonist Titania first appeared in "Marvel Super-Heroes Secret Wars No. 3" in 1984. In the comics, Mary MacPherran was a small high school girl taken from Earth to Battleworld; there she was given superpowers by Fantastic Four archenemy Dr. Doom. She grew a foot and a half and gained strength and invulnerability sufficient to go toe to toe with Thor, Wolverine and, of course, She-Hulk.

Since several of those elements have yet to be introduced to the Marvel Cinematic Universe, it seems a fair bet the character will be radically reimagined for the show, which stars Tatiana Maslany in the titular role.

Giant Freakin Robot quoted a "trusted and proven insider source" saying Jamil's character would start as "a glamorous social media influencer, Kardashian-esque with a dark side." That persona would certainly seem to be in Jamil's wheelhouse after her memorable "Good Place" turn as fashion model, philanthropist and high-society name dropper Tahani.

The cast of "She-Hulk" is led by Emmy winner Maslany as Jennifer Walters/She-Hulk, a lawyer who happens to be a cousin of Bruce Banner/The Hulk. In the comics, a blood transfusion from Banner transforms her into a jolly green giantess, but one with considerably more mental control than Banner's original Hulk form.

In the TV show, Mark Ruffalo is set to reprise his MCU role as Banner/Hulk, with Tim Roth returning as the monstrous Emil Blonsky/Abomination from the second-ever MCU film, "The Incredible Hulk." "Hamilton" Tony winner Renee Elise Goldsberry is playing a character named Amelia. The show's creator and head writer is Jessica Gao of "Rick and Morty" fame (she wrote the beloved "Pickle Rick" episode).

Giant Freakin Robot first reported Jamil's casting three weeks ago, with additional reporting by the Illuminerdi and confirmation Friday by the Hollywood Reporter.