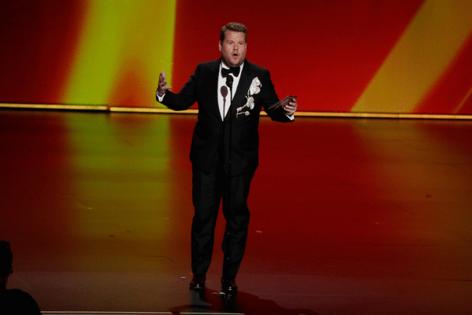 NEW YORK — More than 11,500 people have signed a petition urging CBS host James Corden to end his “incredibly culturally offensive” truth-or-dare segment called “Spill Your Guts,” in which contestants have to either answer a tough question or eat something Corden and his producers find disgusting.

According to the Change.org petition’s creator, the food options offered in “The Late Late Show” bit often have an anti-Asian flavor, which could contribute to harmful stereotypes.

“He’s presented foods such as balut, century old eggs, and chicken feet, and which are often regularly eaten by Asian people,” the petition reads. “During these segments, he’s openly called these foods ‘really disgusting,’ and ‘horrific.’”

Petitioners feel that in this an age when violent crimes against Asians are on the rise, “Spill Your Guts” further “amplifies and encourages” negative behavior toward people of the afflicted communities.

“Not only is this segment incredibly culturally offensive and insensitive, but it also encourages anti-Asian racism,” the petition claims.

According to the Los Angeles Times, where “The Late Late Show” is taped, L.A. experienced an 80% uptick in hate crimes against Asians the first quarter of 2021 versus the start of 2020. New York City saw a 223% jump in that same comparison.

The missive says it holds Corden and his program responsible for the content of the controversial segment and is asking for an apology as well as the cancellation of “Spill Your Guts.”

The petition, ends with a list of suggestions to help make amends, including changing the kinds of food used in the segment, donating money to Asian-owned restaurants and businesses and an apology from Corden.

“The Late Late Show” did not immediately respond to a late request for comment.

One of the big-budget casualties of COVID-19 pandemic closures, Ryan Reynolds' "Free Guy" has a this-time-for-sure release date and a spiffy new trailer to prove it.

The three main trailers accompanying each of the movie'...Read More