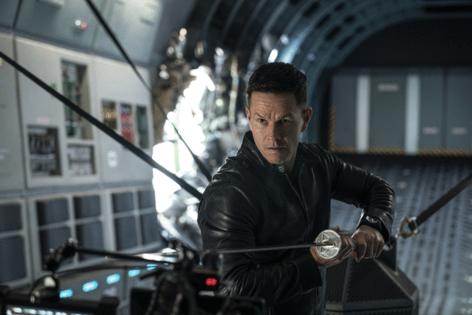 Why does “The Matrix” work? Many reasons. Keanu Reeves and Carrie-Anne Moss at rest or in motion. Laurence Fishburne hypnotizing the exposition like a wizard. The kinetic possibilities of the “bullet time” slow-motion concept. The idea that we’re all pawns stuck inside someone else’s virtual-reality game: paranoia gold. Plus, the sunglasses.

Maybe if “Infinite,” starring a plainly baffled Mark Wahlberg, had figured out the eyewear angle it’d be less of a crumb-bum, dumbwise. Maybe the movie’s story of reincarnated souls, tasked with saving the human race from rival infinites out for total destruction, needed a smoother operator than director Antoine Fuqua, who’s more of a brute-force man (best known for “Training Day’” and “The Equalizer”).

Ian Schorr’s script is the main adversary. It’s adapted from the 2009 D. Eric Maikranz debut novel; Todd Stein gets screen story credit. In the near future, a secret cadre of “Infinites” are divided between “Believers” and “Nihilists,” burdened with “perfect memory of all their past lives,” per the voice-over. A Mexico City prologue set in “the last life” finds one Heinrich Treadway (Dylan O’Brien) in a fast/furious/ridiculous car chase. This Believer has purloined an all-important “egg” that holds the potential for global annihilation, and the Nihilists want it back. Honestly, “The Egg and I” would’ve been a better title.

The prologue turns out to be the latest hallucinatory gotcha haunting the Wahlberg character, Evan Michaels, whose self-described struggles with mental illness require a lot of medication. Oddly, Evan has mad blacksmith and sword-making skills he cannot explain, though Toby Jones (good ol’ Toby Jones, always good, even in bad movies) explains them for us.

In one of many past incarnations, Evan was a whiz-kid Japanese samurai. In the movie’s present day, in New York City, he meets the movie’s nihilist antagonist (Chiwetel Ejiofor, waging a valiant war with his own gassy speeches) who wants that egg bad. He taunts Evan with little comments about how they met during the Second Punic War, though the interrogation ends before Ejiofor’s character has a chance to sing the Rodgers and Hart classic “Where or When.” That beauty took care of the same deja vu notion in three minutes, as opposed to the running time of “Infinite,” which (checks notes) is 106 minutes, but works on Buzz Lightyear time: to infinity and beyond!

So, no musical interlude. But Sophie Cookson of the “Kingsman” movies suddenly smashes her sleek getaway car right through the police station wall, and while I’d love to report “Infinite” takes off from there, it keeps stalling out even when it switches transportation modes. Whisked by plane to the Believers’ Shangri-La-style training compound, Evan remains mute, surly and confused throughout much of the picture, and Wahlberg no doubt drew on his personal experience making the movie for the purposes of starring in the movie. Over and over, he’s stuck responding to reams of reincarnation theory or egg-related matter with “That’s crazy” or “I don’t even know what that means!”

There’s one hell of a lot of torture and bloodletting in “Infinity,” including gasoline waterboarding and finger removal. The PG-13 rating is total bunk; watch this movie back to back with “In the Heights,” also rated PG-13, and tell me I’m wrong. Fuqua samples bits of “Kingsman” (in the posh, fake-Bondian London scenes), “The Matrix” (in its dystopian world-building, successful in “The Matrix,” unsuccessful here) and “Inception” (in the climactic brawl inside an out-of-control cargo plane). The film doesn’t begin to know what to do with the reincarnation idea beyond a few sharply edited micro-flashbacks. Is the look on Wahlberg’s face the character thinking What is going on? Or is it the actor thinking Am I in the next ‘Matrix’ or the silliest movie of 2021?

Where to watch: Now streaming on Paramount+

The silly, junky science-fiction thriller "Infinite" posits a universe where reincarnation is real and a few human souls have the ability to retain memories from their past lives. I wish I could leave it at that, but at ...Read More