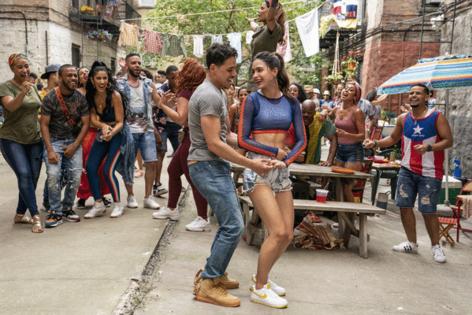 The plot lines of the movie “In the Heights” are slightly different from those of the beloved Broadway musical, which ran for nearly 1,200 performances and won four Tony Awards in 2008. With music and lyrics by Lin-Manuel Miranda and a script by Quiara Alegria Hudes, it zooms in on the close-knit Latino community of the titular Upper Manhattan neighborhood.

To adapt the story into a film, “we didn’t want to go external with the conflict, as if there’s some big bad landlord behind all the gentrification,” said director Jon M. Chu. “Instead, we went deeper into what drives each of these characters, and made their dreams and hopes and struggles as big as any movie you’ve ever seen. Because there’s no such thing as a small story.”

Here are five of the major changes to “In the Heights” in its translation from stage to screen:

The stage show starts with Usnavi opening his bodega for business, serving cafe con leche to his friends and neighbors as he introduces them to the audience. The movie stays true to this sequence, but only after a setup with Usnavi (Anthony Ramos) beginning the story from a bar on an idyllic beach.

The framework does double duty: Strategically, it grounds the story’s pivots into song, which generally are more believed onstage than onscreen. In the movie, the songs can be considered “the embellishments of a storyteller,” said Hudes. Which is fitting, since “in Washington Heights, everyone has their windows open and blasts their music at top volume, so you can hear reggaeton and boleros on the same block. That’s how life is lived here.”

It also keeps the viewer guessing on the fate of Usnavi, who wrestles with his lifelong dream to return to his family’s hometown in the Dominican Republic. Just before the first beats of the opening number, the movie shows Usnavi waking up to photos of his child-age self with his father on that same beach. “Best days of my life,” he whispers to himself.

That brief but telling moment, which also wasn’t in the stage show, is “more than nostalgia — there’s a sense of dislocation that he lives with every day because he was uprooted,” said Hudes.

Usnavi ultimately decides to stay with his community in Washington Heights, which is why the ending reveals that the “beach” from the beginning was always the bodega, which Usnavi’s parents opened and left to him.

“This place is beautiful for what it is — not because of the beach that they painted on the store’s walls, but because of its history,” said Chu. And the movie ends with Usnavi’s daughter looking into the camera to evoke “the idea of building a legacy to pass onto your kids — like, tag, you’re it.”

SAN JOSE, Calif — Having canceled last year’s event due to the COVID-19 pandemic, the Monterey Jazz Festival is set to return in 2021 with a terrific lineup that (thus far) includes Herbie Hancock, George Benson, Terri...Read More