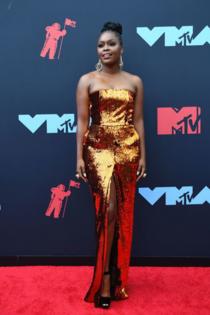 LOS ANGELES — Star choreographer-turned-rapper Charm La'Donna was only a junior at the Los Angeles County High School for the Arts when she was scouted to dance backup for Madonna on her 2006 "Confessions" world tour.

"I had never left the United States before. Then suddenly, it was eight months with Madonna," says La'Donna. The "Confessions" tour transported the then-16-year-old from her mother's house in Compton to dozens of cities in Europe, Russia and Japan; those months spent globetrotting with Madonna's crew provided her with a master class in translating music to movement.

"From the time I was a kid, everything about me has been interdisciplinary," she says. "I don't have a dance chapter, I don't have a music chapter. My experiences can be broken down into chapters, but my gifts cannot."

On her debut EP "La'Donna," she's transfigured the ultra-feminine swagger she brings to dance into sinuous, R&B-inflected hip-hop, reflecting on her ascent from an ambitious young girl in Compton to a jet-setting choreographer for Dua Lipa, Selena Gomez, Kendrick Lamar and Rosalía. La'Donna's clever fusion of flamenco and hip-hop moves for Rosalia's hit with J Balvin, "Con Altura," won her the MTV Video Music Award for best choreography in 2019. "Having that platform sparked something in me," says La'Donna of the VMA. "That's when I began to see myself as an artist."

Born Charmaine Jordan, La'Donna credits her success to her mother and grandmother, as well as the village of women in Compton, all connected by blood, friendship or simply proximity.

"I am a proud product of my environment," she says. "I've been all over the world, but I carry the Westside with me wherever I go."

She describes this matriarchy, and the safety net it provided during times of financial hardship, amid the sun-soaked trap bounce of "Palm Trees" — where, "if I ain't got it, sister got it, cousin got it, auntie say she got me." In the music video, her little cousin emulates both her verses and dance moves with childlike gusto. Other neighborhood girls surface in her video for "Westside," a feel-good composite of pop, soul and hip-hop with an '80s sheen, on which La'Donna bids farewell to fair-weather friends.

"We filmed all my videos in three days — my cousins, aunties all came through. The girl who braids my hair? She's been braiding my hair since we were 12 years old," she says about her childhood friend Twy Bernal, who runs her own business called the Braid Bar.

"I was raised to be a strong, self-sufficient Black woman," "La'Donna says. "But I needed that community support in my life. There's grace and hope in that."

La'Donna's mother drove the city bus across the Gardena route before shuttling young Charm to dance class, which she attended from the time she was 3 years old. On an afternoon together in her hometown, we cruise past the old Compton Fashion Center, former home of the swap meet that La'Donna used to frequent with her friends; to her disappointment, it has been replaced by a Walmart. Charm takes us past an old neighborhood favorite of hers, Tam's Burgers on Rosecrans, where YG once shopped for AK-47s and Suge Knight mowed down two men in his truck.

Do bands owe it to their fans to stick to what first won them an audience, rather than changing with the times? Of course not. If Charlie Watts quit Mick Jagger and ...Read More

There were more Emmy submissions than ever last year, but that bounty wasn't reflected in the variety sketch category, which saw its number of nominees fall to three because there were only 14 contenders. That led the ...Read More

CHICAGO — Posing for photographs on the grounds of the Dearborn Homes development, Dreyana Grooms is approached by a building maintenance worker who wants to let her know police have been towing cars from the lot where ...Read More

We all went a little nuts in quarantine.

The short film “Nuts,” an entry in the two-part star-studded COVID anthology film “With/In” and Chris Cooper’s directorial debut, builds off that premise.

I have come to understand that I have a thing for John Stamos. Not a Tiger Beat, 16 magazine thing, with pinups on the inside of my locker door. I didn't grow up on "Full House," being already grown when it debuted in 1987...Read More

Imagine ordering a limousine pickup at the airport and John Cena shows up as your driver. It’s something a number of real people got to experience before Cena was famous, when he worked as a limo driver. But a lift from ...Read More