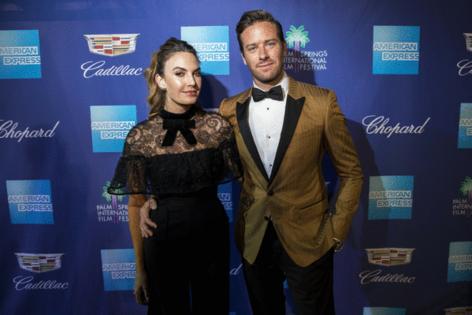 Armie Hammer, the “Call Me by Your Name” actor who has been under investigation by the LAPD’s sex crimes division, has reportedly entered a rehab facility in Florida where he is addressing issues related to drugs, alcohol and sex.

The 34-year-old got on a plane May 29 on Grand Cayman, three sources told Vanity Fair, with a witness saying on social media that he was dropped off by estranged wife Elizabeth Chambers and their two kids. He checked into an in-patient facility outside of Orlando, Florida, two days later and has been there since, two sources told the magazine.

Chambers, who split from Hammer in July 2020 after a decade of marriage, has been living with their children in the Caymans so they could go to school during the pandemic. The actor spent a chunk of his childhood living on the islands.

Hammer’s career fell apart swiftly starting in early January after an Instagram account, @houseofeffie, began publishing messages, allegedly from the actor, in which he detailed kinky sexual fantasies including rape, cannibalism and other violent acts.

The actor subsequently left the Jennifer Lopez movie “Shotgun Wedding,” saying in a statement, "[I]n light of the vicious and spurious online attacks against me, I cannot in good conscience now leave my children for 4 months to shoot a film in the Dominican Republic.” He was replaced by Josh Duhamel.

He also called the allegations “bull— claims” and said he was not responding to them.

Then two ex-girlfriends, Courtney Vucekovich and Paige Lorenze, spoke out in a similar vein about their alleged treatment by “The Social Network” actor. “He said to me he wants to break my rib and barbecue and eat it,” Vucekovich told Page Six in January. Lorenze showed the same outlet screen grabs in early February in which Hammer allegedly said he wanted to make her his “perfect little slave.”

A couple of weeks later, Chambers posted on Instagram: “For weeks, I’ve been trying to process everything that has transpired,” she wrote. “I am shocked, heartbroken, and devastated. Heartbreak aside, I am listening, and will continue to listen and educate myself on these delicate matters. I didn’t realize how much I didn’t know.”

Days later, Hammer was dropped by his agency, William Morris Endeavor. He also walked away from “The Offer,” an upcoming Paramount+ series about the making of “The Godfather.”

Then, on March 18, a 24-year-old woman identified as “Effie” — the same name used on the Instagram account that posted the original messages — appeared in a Zoom conference with attorney Gloria Allred and accused Hammer of “violently” raping her over the course of four hours in 2017.

Nearly a year after his daughter’s death, the father of Naya Rivera is opening up about the “Glee” star’s career ambitions and love for her family.

Rapper T.I. is using the new video for his song “What It’s Come To” to respond to allegations he and wife Tameka “Tiny” Harris sexually abused multiple women.

The Atlanta-based music star and his wife play ...Read More

Quibi was a massive failure of a streaming service that came and went last year in the blink of an eye during the pandemic.

Roku picked up Quibi’s shows and the service has decided to give Kevin Hart’s comedy “Die ...Read More

“In the Heights,” the feature film adaptation of Lin-Manuel Miranda’s Tony Award-winning Broadway musical, failed to topple “A Quiet Place Part II” from the top spot at the box office this weekend. Coming in ...Read More