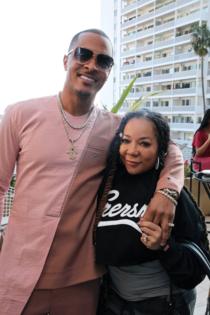 Rapper T.I. is using the new video for his song “What It’s Come To” to respond to allegations he and wife Tameka “Tiny” Harris sexually abused multiple women.

The Atlanta-based music star and his wife play themselves in the video while actors are cast in the roles of several female accusers and a male lawyer.

The video portrays the couple as the targets of a vast shakedown scheme. It depicts one accuser standing in front of a wall covered with photographs and news stories chaotically connected with webs of string anchored by pushpins.

A real May 18 headline from the Los Angeles Times flashes on the screen, “New sex assault claims leveled at T.I. and Tiny, part of wider allegations they deny.”

“Extortion, is that what you got your mind on, shawty?” the Grammy winner raps in the video. “Bet you thought this s— was sweet and I would pay in a week.”

He calls the allegations “he say, she say,” claims the women are “lying” and raps, “I keep none against they will, if they leave that’s they disadvantage.”

“The object of the game is kill the king,” he raps.

The 40-year-old entertainer and his wife are under an active police investigation in Los Angeles after a woman filed a report April 8 claiming she was sexually assaulted by the couple in 2005, an LAPD spokeswoman confirmed to the Associated Press.

Las Vegas police also took a report from a woman claiming she was the victim of a 2010 sexual assault involving the couple. That case was closed because it was too old to prosecute.

In March, New York lawyer Tyrone A. Blackburn said he had been contacted by more than 30 alleged accusers and witnesses and was actively representing 11 clients related to claims against the couple.