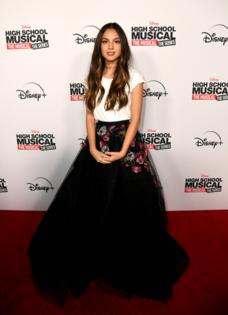 Days after performing her viral hit “Drivers License” and meeting Taylor Swift at the Brit Awards, Rodrigo dropped an edgy music video for her new song, “Good 4 U,” on Friday — the same day the second season of her TV series premiered on Disney+.

This weekend, she’ll make her “Saturday Night Live” debut as the musical guest alongside host Keegan-Michael Key. And her highly anticipated debut studio album, “Sour,” comes out next week.

Did we miss anything?

The teen songwriting phenom is trending again, thanks to the buzzy release of “Good 4 U,” a pop-punk anthem that sees Rodrigo fly into a fiery rage against her ex. (You know the one.)

“Good for you, I guess you moved on really easily/ You found a new girl, and it only took a couple weeks/ Remember when you said that you wanted to give me the world?” Rodrigo begins on the angsty track

“Good for you, I guess that you’ve been working on yourself/ I guess that therapist I found for you, she really helped/ Now you can be a better man for your brand new girl.”

The emo-adjacent music video, which has already racked up more than 6 million views on YouTube, matches the tune’s vengeful tone and takes it to the next level. At one point, the 18-year-old singer goes shopping for a giant tank of gasoline in a cheerleading uniform and black latex gloves, on a heartbroken mission to burn it all down.

The video also contains a slew of visual homages to vindictive mean girls of cult classic teen movies past, such as “The Princess Diaries” and “Jennifer’s Body,” the 2009 horror film starring Megan Fox as a cannibalistic, demonic cheerleader who violently preys on her male classmates.

“Good for you, you look happy and healthy/ Not me, if you ever cared to ask,” she sings in the chorus. “Good for you/ You’re doing great out there without me, baby/ God, I wish that I could do that