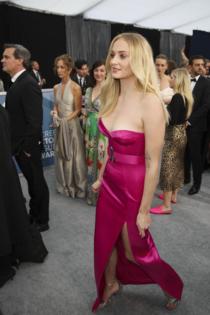 In a series of Instagram videos that have since been deleted, the “Game of Thrones” actor condemned members of the media for swarming her 9-month-old child, Willa, after Turner and Jonas made a conscious decision not to share photos of their baby on social media.

“I guess, yesterday, some paparazzi managed to get a picture of my daughter, and I just want to say that the reason that I have been not posting pictures of my daughter — and making sure that we can avoid paparazzi at all costs — is because I explicitly do not want those photos out there,” Turner said Wednesday on her Instagram story.

“She is my daughter. She did not ask for this life — to be photographed. It’s f— creepy that grown, old men are taking pictures of a baby without their permission. I’m sickened. I’m disgusted. And I’m respectfully asking everyone to stop following us around and stop trying to take pictures of our daughter — and especially printing them. It is disgusting, and you do not have my permission.”

(For good measure, the Queen of the North later replaced her Instagram PSA with a blurry photo of a middle finger.)

The “Dark Phoenix” star gave birth to Willa in the summer of 2020, about a year after marrying the Jonas Brothers singer. The celebrity couple tied the knot twice: first at a surprise Las Vegas wedding in May 2019, followed by a more formal ceremony in France.

Last week, both performers celebrated their second wedding anniversary by posting a slideshow of never-before-seen images from their Vegas elopement.

Turner, 25, and Jonas, 31, began dating in 2016 and got engaged in 2017. On Sunday, the former Disney Channel star uploaded a throwback photo of Turner cradling her baby bump and wished his wife, his mother and “all the amazing [mothers] out there” a happy Mother’s Day.