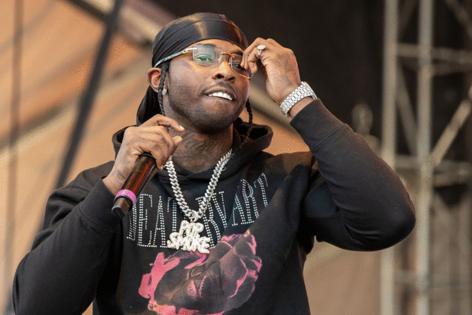 The home intruders also were after the rapper’s Cuban link chain but apparently only managed to swipe the luxury timepiece, which they later resold for $2,000, the detective said.

The teen who pulled the trigger, the youngest of the four defendants now facing murder and robbery charges in the case, allegedly admitted his role in the Hollywood Hills slaying during a recorded interview with a cellmate at a juvenile detention center last May.

“He admitted that he shot the victim three times with a Baretta 9 (mm),” Los Angeles Police Department Detective Carlos Camacho testified Friday at a preliminary hearing for a different suspect, Corey Walker, 20, the sole adult defendant in the high-profile case.

The 15-year-old defendant “admitted that they asked for the jewelry” and then had “a confrontation” with Pop Smoke that quickly turned deadly, the detective said.

“They got into a fight, and he shot him three times,” Camacho said, citing the 15-year-old defendant’s recorded juvenile detention center interview. “He said he shot him on the back.”

Walker, 20, has pleaded not guilty in the case. His defense lawyer Christopher Darden told the New York Daily News on Friday that Walker never even entered the house for the deadly confrontation, though prosecutors have placed him at the scene with cellphone records and say his Infinity was the getaway vehicle.

According to Camacho, Walker also confessed to his role in the murder during a separate, secretly recorded jailhouse interview with a different adult informant placed in his cell after his July arrest.

Walker allegedly admitted the group used ski masks, gloves and a police scanner as they carried out the home-invasion robbery.

“He said that when the individuals got inside, the suspects confronted (Pop Smoke), who was in the shower naked,” Camacho testified.

If you can’t get to Italy this month, you can do a lot worse than watching the new Pixar movie “Luca,” which takes place in a picture-perfect seaside town on the Riviera. Everything in this movie, directed by Enrico ...Read More

A few years ago, an editor at the Tribune asked us to write about our guilty pleasures, and I focused on Bravo’s “Real Housewives” franchise, a constellation of shows I think of as Sandbox Tantrums of the Damned. Why...Read More

Jay-Z is knocking a New York photographer for allegedly “exploiting” his image after the two men worked together on photo shoots back when the Roc-A-Fella Records founder was a Brooklyn teen on the cusp of superstardom...Read More

For the second year in a row, the pandemic thwarted plans for the Electronic Entertainment Expo, the video game trade show colloquially known as E3, to stage its annual event at the Los Angeles Convention Center. This ...Read More

Roger Waters says Mark Zuckerberg asked to use one of Pink Floyd's most famous songs to promote Instagram. Waters' response to the man he calls "one of the most powerful idiots in the world"? "No f—ing way!"