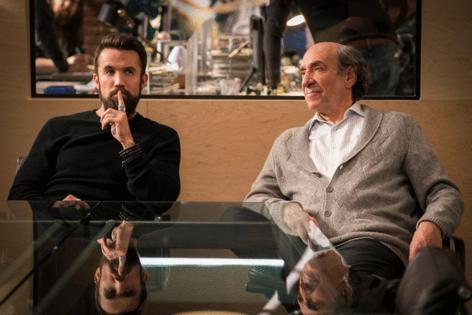 Somewhere along the way, video game companies figured out they could keep monetizing games even after people plunked down the initial purchase price, by offering things like loot boxes or enhancements or pretty much any other in-game purchase someone could dream up. If done right, revenue keeps rolling in.

I love that this specific job description has been brought to life on the Apple TV+ series “Mythic Quest,” a workplace comedy about people who make video games for a living. The man in charge of monetization is named Brad. He is slippery and cynical and the picture of corporate unflappability. But at heart, Brad is a chaos agent. It’s such a wonderfully self-possessed performance from Chicago native Danny Pudi, and whenever he’s on screen everything clicks.

I can’t say the same for the rest of the show, which premiered last year. It’s back for a second season, which I like considerably more. But first, some thoughts about what I think has been holding the show back.

A TV series can be designed around awful people, but awfulness in and of itself does not equal comedy. Without at least some redeemable qualities here and there, it can feel like you’re watching crabs in a barrel. That’s my theory, anyway. Plenty of people disagree. Otherwise a show like “It’s Always Sunny in Philadelphia” — where awfulness is the entire point — wouldn’t be one of the longest-running sitcoms ever, with its 15th season set to premiere sometime this year.

A toned down but similar comedic philosophy seemed built into the ethos of “Mythic Quest’s” first season, which often left me with a sour aftertaste, and it’s no coincidence that the show’s three creators — Charlie Day, Megan Ganz and Rob McElhenney — also come from the world of “It’s Always Sunny.”

On “Mythic Quest,” the characters are less overtly shameless and amoral, but they’re still cartoons to an extent. The company’s lowly but charmingly earnest game testers, played by Ashly Burch and Imani Hakim, are actually the most real of the assorted Mythic Quest employees and, weirdly, they don’t get many opportunities to be funny. But fundamentally this has been a show about flawed people rendered as caricatures.

That’s less of a glaring issue in the new season, and watching it I couldn’t help but think about that other Apple TV+ comedy “Ted Lasso.” That’s probably not fair, and I’m not saying “Mythic Quest” needs an endearingly upbeat character at its center. But one of the keys to “Ted Lasso’s” success is that it understands the power of contrasts — between Ted’s perpetual optimism and everyone else’s grumpiness — which is such a rich source of comedy and precisely what has been missing on “Mythic Quest.”

In the nine episodes of Season 2, the show inches closer to that state of equilibrium. It would be reductive to say it’s gotten softer; I think the writing is simply better, with a stronger grasp of the ways our insecurities are nurtured and goaded by internal as well as external forces.

McElhenney is back as the egotistical creative director, who first conceived of the medieval-themed “Game of Thrones”-esque video game that keeps everyone employed. He is a man who wears rings on every finger of both hands (I love this absurd costuming detail) and he is now uncomfortably sharing his job title with the recently promoted head engineer (played by Charlotte Nicdao), who is smart as ever but still lacking the kind of social intelligence that would make her even a halfway decent co-worker, let alone manager of people. She tends to sabotage herself before even her lunkhead colleagues can get around to it.

Pudi’s monetizer extraordinaire is mentoring a zealously intense assistant (Jessie Ennis in a performance that goes full Machiavelli), while the game’s wimpy executive producer (David Hornsby, another “It’s Always Sunny” alum who is also an executive producer here) remains more consumed with his personal anxieties than the demands of the job.