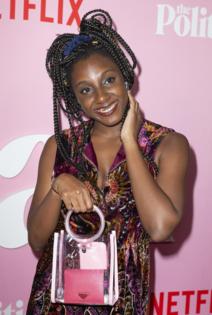 Ziwe has always loved asking people questions. Maybe a little too much.

"That was something I was penalized for in school — like, I was annoying," says the comedian in a video chat. "But now it serves a purpose."

The 29-year-old New Yorker is known for her frank, funny conversations about sensitive issues, especially race. It all began with a YouTube series, "Baited," where she'd needle her comedian friends by asking humorously uncomfortable questions like, "On a scale of Malcolm to Martin, how much do you hate white people?"

When the pandemic struck, Ziwe, who uses a mononym professionally instead of her full name, Ziwe Fumudoh, and describes herself as "the Cher of alternative comedy," took to broadcasting celebrity interviews on Instagram Live.

These discussions often yielded cringe-worthy responses, like when embattled chef Alison Roman was asked to name five Asian people and couldn't. They also have made Ziwe into one of comedy's hottest rising stars.

Beginning Sunday, she will bring the same fearless satire to "Ziwe," a late-night series for Showtime, where she previously worked as a writer on the network's popular late-night show, "Desus & Mero." Filmed on a candy-colored stage decorated with portraits of Michelle Obama and Oprah Winfrey, the variety show features sketches, musical numbers (like Cher, Ziwe also sings) and slyly edited interviews with celebrities. (Ziwe to Fran Lebowitz: "What bothers you more, slow walkers or racism?") Each episode focuses on a single subject, like immigration, beauty standards or the wealth gap, and includes appearances by Bowen Yang, Cole Escola and other comedians from Ziwe's circle.

"My show is super-hyper-feminine and very pink. That was a conscious decision, knowing how late night is traditionally masculine, how it's mostly guys named Jimmy or John wearing a suit. So how do I undercut that in my own special way?" says Ziwe, who dresses like Elle Woods (she's wearing a fuzzy fuchsia cardigan over Zoom) and takes an aggressively high-low approach to cultural commentary, name-checking both Michel Foucault and Teresa Giudice with ease.

The daughter of Nigerian immigrants, Ziwe grew up in a largely working-class town in Massachusetts but attended Phillips Academy Andover, one of the most prestigious prep schools in the country — a contrast that "really informed my purview on race and class," she says. After graduating from Northwestern, she landed in New York and worked a day job at Lorne Michaels' Above Average Productions while performing at venues around the city.

There were lean times, but it's worked out well so far. In addition to her series, she has an essay collection, "The Book of Ziwe," due next year.

"My goal is world domination," she says.