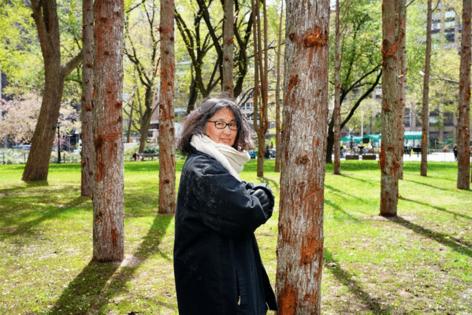 For more than a year, I've kept a folder on my desk that was stuffed full of scribbled notes for the story I was working on when the pandemic hit. Every journalist, it seems, has a version of this folder — ideas rendered moot by the arrival of our global calamity.

The story, about the architecture of libraries, was also a story about how women design for women. The library in question was one I knew intimately: Neilson Library, the central library at Smith College, the women's college in Northampton, Mass., where I studied as an undergraduate. My focus was a $120 million renovation of that space designed by Maya Lin Studio, in collaboration with Boston-based firm Shepley Bulfinch, which had devised Neilson's master plan.

Shepley has a deep know-how in academic design, including plenty of libraries. And Maya Lin Studio, of course, is run by the celebrated designer behind the groundbreaking Vietnam Veterans Memorial in Washington, D.C., as well as the intimate Langston Hughes Library in Tennessee. Lin is also someone with a profound emotional connection to Smith College: Her mother, Julia Ming Hui Chang Lin, landed at Smith in 1949 after escaping the Communist invasion of Shanghai on a fishing boat‚ her Smith acceptance letter and two $10 bills sewn into her dress.

In late February 2020, as the novel coronavirus was creeping into the U.S., I visited Lin at her studio, a comfortably worn loft space in downtown Manhattan. She described how much Smith had meant to her and her mother.

What began as a story about a building, however, ultimately became about how so much can change in the course of one fateful year.

On that crisp February morning in which we met last year, Lin said something that later rattled around my brain for weeks.

At the time, she also was working on an art installation titled "Ghost Forest" that would place a grove of towering Atlantic cedars — all dead — in the middle of Manhattan's Madison Square Park. The piece was intended to draw attention to the plight of a native tree that has been decimated by habitat loss, the presence of invasive species and, now, climate change.

"We cannot continue on this path," Lin stated firmly as she described the urgent need to work collectively to mitigate the effects of climate change.

Three weeks later, the World Health Organization declared the COVID-19 outbreak a pandemic — and our ability to work collectively was put to rigorous test.

Kevin Hart thinks people should be allowed to disagree, and to screw up and learn from it. And now he’s wondering when that stopped being OK.

“When did we get to a point where life was supposed to be perfect? Where ...Read More

Singer-songwriter David Archuleta has identified as a member of the LGBTQIA+ community in a vulnerable Pride Month post reflecting on sexuality and religion.

On Saturday, the “American Idol” alum opened up about his ...Read More

The 63-year-old journalist, who had been off the air for about a month to treat the disease, ...Read More

CHICAGO – The Chicago Blues Festival, Gospel Music Festival and Jazz Festival all are taking another summer off, according to an announcement Monday from Mayor Lori Lightfoot and the Chicago Department of Cultural ...Read More

John Gabriel, the daytime soap star who went on to roles in John Wayne’s “El Dorado” and “The Mary Tyler Moore Show,” has died.

“It is with an unspeakably heavy heart that I share the news of my ...Read More

Chrissy Teigen issued a lengthy apology Monday for her “past horrible tweets,” and said she’s privately reaching out to “the people I insulted.”

The TV host and supermodel had been quiet on social media in ...Read More