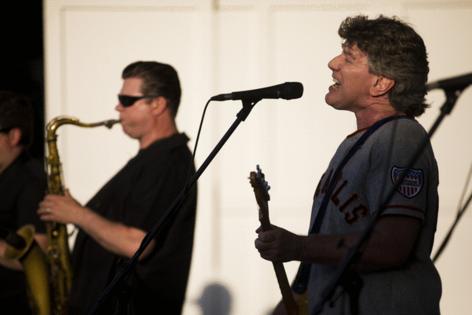 MINNEAPOLIS – While their hero Van Morrison decried "pseudo-science" and released anti-lockdown songs during the pandemic, his Twin Cities devotees the Belfast Cowboys followed safety guidelines and still raised around $100,000 off livestream gigs for needy neighbors.

That contrast is underlined by the fact that both the Cowboys and Van the Man have new albums arriving Friday — a pure coincidence, B.C. bandleader Terry Walsh insists.

"I'm looking forward to his record and am willing to give him the benefit of the doubt," said Walsh, whose group also finally returns to playing for live audiences this week. Their sold-out show Friday outside the Hook & Ladder is now being offered as a livestream performance.

The Belfast Cowboys started as a Van Morrison tribute band 19 years ago on St. Patty's Day. They were due to perform again on March 17, 2020, but that was the week all the music venues shut down due to COVID-19.

So Walsh and his crew instead convened in local keyboard wiz Robert Hilstrom's recording studio that night to play one of the Twin Cities music scene's earliest livestreaming events. The impressive results of that live experiment are exactly what you hear on their new album, "This Magic Night" — minus about two-thirds of that night's four-hour marathon performance.

"We were all planning to be together that night anyway, so we figured we should do something," Walsh recalled.

"We thought maybe we'd get a couple good tracks out of it, but when I went home and listened to them I was really happy with how good it sounded — not all of it, but a lot of it."

Chalk that unrehearsed near-perfection up to the fact that the core members of the Belfast Cowboys have been playing a weekly Tuesday gig as St. Dominic's Trio for the past 15 years, first at the old Nye's and more recently at the Driftwood Char Bar in south Minneapolis.

A lot of the tunes recorded in the marathon session are ones they often pull out week-to-week, but with the full horn section added. The album's tracklist includes: covers from Jonathan Richman, Solomon Burke and Slim Dunlap; Walsh's originals such as "Bike Ride on 35-W" and the fun new rocker "(Theme From the Motion Picture) Joe Fahey;" plus "Caravan" and several other Morrison classics. Look for it on CD in local shops or via streaming sites.

Ahead of the Cowboys' Hook & Ladder gig Friday, St. Dominic's Trio also returned to the Driftwood on Tuesday night, their first show there in 14 months.

"It was amazing," bassist Joe Baumgart posted afterward. "I'm blessed to be able to make wonderful music with the best guys you could ever hope to have in a band."

Those Tuesday gigs will (knock on driftwood!) continue every week from here on out, with limited capacity and vaccines and masking preferred for at least the first few months.

Walsh still plans to keep livestreaming the Driftwood shows on Facebook, too — a nod to fans still wanting to stay home, and a thanks to the many people who kept donating to Foothold Twin Cities every week during the pandemic, as St. Dominic's Trio maintained the gigs virtually from home.

Walsh and his partner Amber Lampron (a public school educator) started Foothold TC in 2015 off of donations in lieu of cover charges at the Driftwood gigs. An example of where the money goes: Two weeks ago, Foothold paid overdue rent for a family with five young kids and the mom in the hospital, Walsh said.

Said the grateful bandleader, "I really can't believe how much our fans – especially a few very generous regulars — kept this beautiful thing going through this crazy time period."

That "crazy" reference, by the way, also was not in any way a reflection on Van the Man.