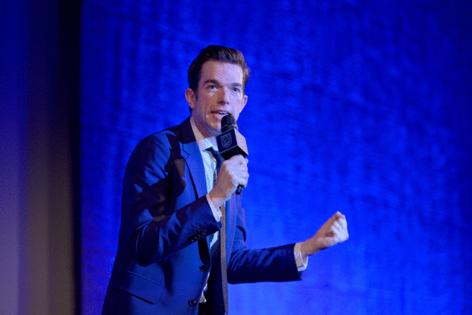 It was a blink-and-you'll-miss-it moment. Tickets to comedian John Mulaney's first set of live shows since rehab have already sold out.

Next week's shows mark the return of the "Big Mouth" star to the stand-up stage after a two-month stay in a Pennsylvania facility to treat his alcohol and cocaine addictions. The shows, titled "John Mulaney: From Scratch," are scheduled for May 10-14 at New York's City Winery.

The tickets were announced under the radar, with many fans not knowing they existed until it was too late to buy them. But all hope is not lost — there is a wait list option to get alerts if more tickets become available.

No phones will be allowed inside the venue, and guests must show proof of full vaccination or a negative COVID-19 test within 72 hours to attend the event.

The 38-year-old comedian checked into rehab in December and has been in outpatient sober care since February. A source told the New York Post's Page Six that during that time, Mulaney was "doing well, although he is still not ready to return to work."

Mulaney has been silent on social media since December, and his official website lists "No upcoming dates at this time. Check back soon!"

The Emmy winner has been candid about his struggles in previous stand-up shows and interviews. In a 2018 "Off Camera" interview with Sam Jones, Mulaney spoke about how, at a young age, he used to hide his drug use from his parents.

"I kept up appearances. [My parents] knew that I might go to a party and drink beer or something. They had an understanding of high school parties and they weren't idiots," Mulaney said. "But if I was, you know, messing around with drugs when I was very young, I knew to keep up appearances. I'd be on mushrooms and come through the front door and go, 'Hello. Good evening. I'm going to be upstairs,' and then just run up."

Mulaney joined "Late Night With Seth Meyers" as a staff writer in November, on behalf of his psychiatrist's suggestion to find a job that gave his life structure. He spoke on "Jimmy Kimmel Live!" in December about the new opportunity.

"I cannot stress enough how grateful I am for the job," Mulaney said. "Rather than [Seth Meyers] saying to me, 'John, you're clearly going through something, but your jokes are terrible,' he's given me a couple segments to come on and do what I wrote, and those have been really, really fun."