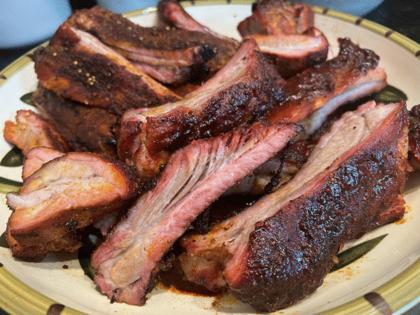 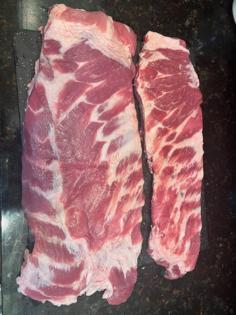 Last night I smoked some spare ribs. I’m always curious to know the true opinion of those who eat the food I prepare. I mean, I REALLY want to know their TRUE opinion. So, this morning, I asked Liz what she truly thought of the ribs. She said they were good, but that she likes ribs where the meat is falling off the bone. My mother-in-law likes them that way too.

As some of my longtime readers may recall, I’ve competed in a Kansas City Barbecue Society-sanctioned event, as well as taking the class to become a certified KCBS judge. The KCBS definition of a perfectly cooked rib is explained this way: “A properly cooked BBQ rib should be moist and tender yet yield just enough so that when you bite into it you see a rounded bite mark with the bone turning white almost immediately.” Unfortunately, a rib where the meat is “falling off the bone” is overcooked.

Last night’s ribs featured two rubs. One rack was served “wet,” or with sauce, while the other was served “dry,” or without sauce. In both cases the rubs were applied to the ribs in the morning and then covered with cellophane and placed in the fridge for a few hours. This dry brines the meat. We went with spare ribs as opposed to baby back ribs. In my opinion spare ribs have better fat content and flavor. In fact, spare ribs are what are used in barbecue competitions. Don’t get me wrong. I love baby back ribs too.

I trimmed them and pulled the membrane off the bone side. The “flaps” that are trimmed off are also smoked, and are wonderful as leftovers or to be used in other dishes. We smoke the ribs at 245 degrees (you can really fine tune the temperature with a pellet grill) for roughly 2 1/2 hours. The dry ribs were then pulled off, and BBQ sauce was applied to the second rack of ribs. The pellet grill was then cranked up to 350 degrees for 15 minutes or so to firm the sauce up. The two rub recipes below are what we used and are my favorite. The rendezvous ribs rub was Elvis Presley’s favorite. They are served dry in Memphis. He used to have them flown out to him on a first-class airline ticket when he was performing in Vegas (this was before FedEx or UPS). The only difference is I smoked the ribs, while in Memphis they cook them with charcoal briquettes. The second rub is more traditional and can be served dry, or as we did, with sauce.

If you watched Paramount’s TV series “The Offer,” you likely gleaned that the transition of the cinematic portrayal of “The Godfather” was complex. In fact, the obstacles presented in ushering Mario Puzo’s ...Read More