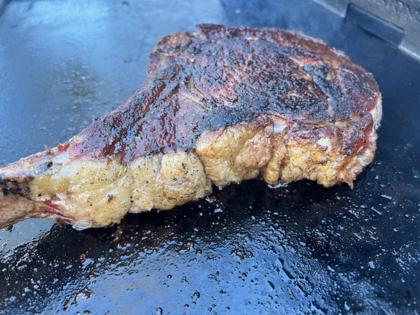 My outdoor grilling, smoking and cooking gadgets have changed quite a bit within the last couple of years. First it was taking the leap to the world of pellet smokers. For the most part I have really enjoyed it. We’ve smoked about everything at this point, including pork butt, beef brisket, poultry, salmon and steaks. We have also found that the stone pizza attachment is used almost as much as anything. There is nothing like a stone cooked pizza using homemade dough for the crust. The pizza attachment in and of itself is a good reason to own a pellet grill.

The one weakness with the pellet grill was it is hard to get the unit hot enough to achieve a true sear on something like you would experience on a gas or charcoal grill. I’m a member of a pellet grill Facebook page where we discuss techniques and recipes, and others were experiencing the same downfall as I had, the lack of a good sear. A lot of the pellet grill owners purchased a second grill to partner with the pellet smoker, an outdoor flattop grill. Basically it’s a big slap of cast iron heated by propane or natural gas flame. It’s a similar cooking surface to what you would see at your favorite breakfast diner or smash burger establishment. They aren’t that expensive, and there are name brands out there like Blackstone (that’s what I have) as well as more generic brands which look just as well made. I bought mine a year ago for around $250 but don’t really know what they cost now with our current bout of inflation. Either way, it’s been a fantastic addition to the grilling lineup. Once you cure the surface, it has the feel of well-seasoned cast iron.

We have made everything on it, including pancakes, breakfast sandwiches, smash burgers, bacon (great for keeping the iron seasoned), all sorts of seafood, stir-fry vegetables, and my favorite, smoked pork chops or steaks. For the steak, we love the tomahawk cut, which looks like something right out of "The Flintstones." The chops and steaks are the main reason I bought the flatiron grill.

You prepare the steaks or chops exactly the same. You buy them thick (mine approach two inches), season them the way you like them seasoned and then smoke them on your pellet grill at 175 degrees Fahrenheit for one hour or so, or until the internal temperature reaches around 120 degrees. Now, have the flattop searing on high and add a little bit of avocado oil (high heat tolerance) and sear both sides of the steak. Don’t forget about the edges. By adding the step of searing you are creating the crust, which is so prevalent at your high-end steakhouses. Add a slab of butter to the top of the steak after pulling it when the internal temperature reaches 135 degrees or so. For some reason I don’t add the butter to the pork chop, nor have I seen anyone else do it. You pull the chop at the same temperature. The meat temperature will rise by another five degrees or so after it’s been pulled.

The end product is unbelievable. A beautiful mahogany color (especially the steak) from the smoke combines with a slightly smoky flavor, topped off with the crusty sear. As good or better than any steakhouse. Enjoy!

MINNEAPOLIS — It sounds heretical, particularly since the outdoor cooking season is getting started, but here goes: For a truly ...Read More

Summer marks a time for many high school graduation parties. But there’s nothing that says freshman, sophomores and juniors can’t have their own slice of celebration, too. After all, don’t some of our cinematic and ...Read More