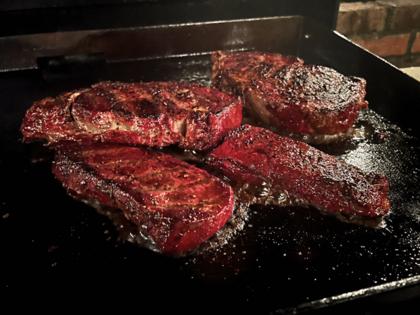 I have been on a lifelong quest — well, at least the past 40 years — to prepare and present the perfect steak. One disclaimer. Please realize it is almost impossible to compete with the steaks offered at top steakhouses, places like Jeff Ruby’s, Ruth's Chris Steak House, etc., primarily due to two reasons.

First, top-end steakhouses typically dominate the “prime” beef supply. “Prime” is the top of the pyramid in terms of quality and marbling and accounts for only 3% of the national beef supply. The second reason is most of these steakhouses dry-age their steaks for sometimes over a month. The end result is a supremely tender steak with an enriched and intense beef flavor. That’s why they charge what they charge for a steak. I’ve seen YouTube videos on how to set up a dry-aging station at home, and as much as it fascinates me I haven’t given that a try. Maybe soon.

Recently we took a trip to Logan Street Market in downtown Louisville, Kentucky. I came across a meat market there that specializes in harvesting beef from local farmers, and they had some beautiful, thickly cut, well-marbled rib-eyes. The proprietor could not say they were “prime” (they hadn’t gone through the United States Department of Agriculture to officially earn that designation), but they certainly looked prime to me. They were almost 2 inches thick. I grabbed two of them to feed five people. Let’s get started.

A bit of background first. I have always been a proponent of the reverse sear method, with some smoking included. Years ago I started a bit of a unique trend where I used my kettle grill to smoke and then sear. Why was it unique? I used a hickory log placed on one side of the grill to hold the coals in place. I nestled the coals up to the wood and placed the steaks on the side opposite to coals, which meant the steaks were not directly over the coals. As the log smoldered (lid on with vents one-half open) it slowly smoked the steaks. I then finished them directly over the coals. It was brilliant. The log was reusable many times over.

This original technique still works, but in this case I was able to use my pellet smoker/grill as well as my outdoor flattop. First, I liberally seasoned all sides of these huge steaks (including the edges) with coarse sea salt, coarsely ground black pepper and granulated garlic. I allowed them to come to room temperature (this took 90 minutes or so due to the thickness) and then placed them on my smoker set to 175 degrees Fahrenheit. I allowed them to smoke until the internal temperature hit 115 degrees or so. This took a bit over one hour. Lastly, I brought the flattop up to 450 degrees or so, put some butter down and laid out the steaks to the most glorious “sizzle.” I pressed down a bit with a large spatula (not too hard) to make sure all of the surface made contact with the flattop to create the crust. I did the same with the other side and all edges of the steak. I pulled the steaks when we hit 130 degrees internally, then let them rest for seven to eight minutes.

The conclusion? They had obtained both a light smoky flavor as well as a perfect crust, which you expect in high-end restaurants. Were they perfect? Darn close, despite not having the benefit of dry-aging.

What have you done lately to up your steak game? Drop me an email and let me know!

The pandemic has changed how we spend time, with many of us hanging out at home more than ever. Does your gift list include loved ones who are experiencing cabin fever? Here are some items that will make life at home a ...Read More