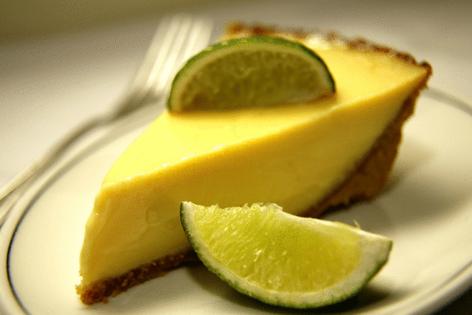 Maybe it’s time to let a little sunshine smile through the winter by introducing a new pie tradition, one that adds a tropical twist to the dessert table. We’re talking key lime pie, Florida’s official dessert since 2006, born in Key West in the 1820s.

Genuine key lime pie is defined by the unique floral-scented juice of the West Indian lime, which is the size and shape of a golf ball, with a leathery skin that turns yellow when the fruit ripens. Those net bags of tiny green limes from Mexico you see in supermarkets, labeled as “key limes”? Not the same thing.

Neither are the big green Persian limes in the neighboring bin. Wrong color, wrong flavor.

West Indian lime juice is absolutely essential for real key lime pie, but you won’t find those limes in California or anywhere else outside of Florida, as disease-control laws forbid their export from the Sunshine State. That leaves our longtime go-to: bottled West Indian lime juice from Nellie & Joe’s Key West Lime Juice Co., a product found in most area supermarkets and an excellent substitute for fresh limes (we’ve made pies with both).

Perhaps ironically — though logically — none of the juice N&J’s bottles is from limes grown on the Florida Keys, the string of coral islands that connect the southern tip of Florida to Key West. That’s because commercial groves of West Indian limes no longer exist there.

The lime is a “dooryard” fruit, meaning the trees are commonly found in residential back yards in South Florida and the Keys as part of edible landscapes. Simply, there’s not enough juice available for commercial use. Instead, N&J’s reconstitutes concentrated lime juice from fruit grown in commercial groves in the Caribbean, South America and Mexico (www.keylimejuice.com).

Like so much of Florida’s history, the West Indian lime has a hurricane connection. One insight comes from “Fruits of Warm Climates” by botanist Julia F. Morgan: “By 1883, the West Indian lime was being grown commercially on a small scale. When pineapple culture was abandoned on the Florida Keys because of soil depletion and the 1906 hurricane, people began planting the limes as a substitute crop. The little industry flourished but was demolished by the infamous hurricane of 1926. Thereafter, it was once again a casual dooryard resource.”

Key lime pie is relatively easy to make, but beware of its many guises. For instance, run away from recipes that call for cornstarch (as a thickening agent) or green food dye or lime Jell-O (to make it “lime green”), or ones that suggest the acidic lime juice will “cook” the raw egg yolks in the filling (say hello to possible salmonella poisoning).

This recipe came my way via a formidable home cook I happened to meet in Miami years ago. She was born and raised in Key West, and her recipe was a family heirloom. It dates to 1875 and shows its age as a culinary antique.

The pandemic has changed how we spend time, with many of us hanging out at home more than ever. Does your gift list include loved ones who are experiencing cabin fever? Here are some items that will make life at home a ...Read More

Technically, Gen Z accounts for anyone born from roughly 1996 to 2010. Maybe that’s you, and you’re just looking for ideas. But if Gen Z makes you think of a teen or young adult in your life who wears clothes that were...Read More

Not everyone on your list wants sun gloves or a handlebar bike bag, but those who do will treasure your gift all year long.

It’s commonly assumed that some books, especially bulky nonfiction, are designed to be gifted on a holiday, given pride of place on a bookshelf and never opened.

For those who have other plans, the following 10 books ...Read More