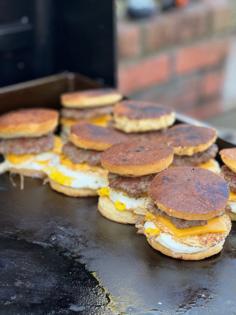 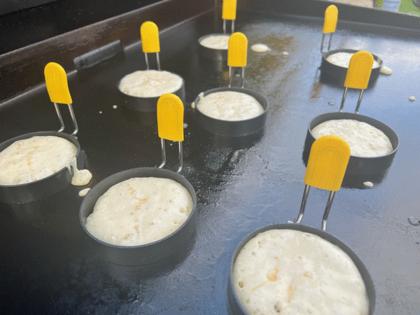 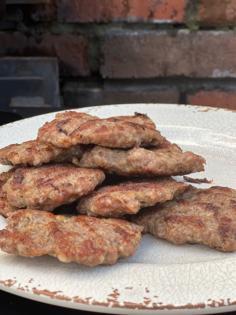 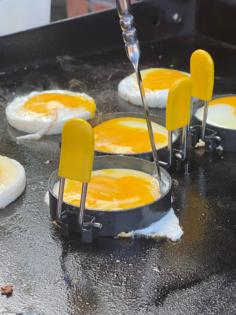 There is a well-known international fast food restaurant known for their delicious breakfast sandwiches. One sandwich in particular is a favorite of one of my daughter’s, Madeline. It features pancakes as buns, pancakes that contain pockets of maple syrup. She asked that we try to re-create this breakfast sandwich on our new flat top outdoor griddle. We attempted these a few weeks ago and then served them again this past weekend.

Now that I have worked out all the kinks, I want to share the recipe and technique with you in more detail. While not absolutely necessary, we did go online and buy some egg ring sets for the sake of visual authenticity. They are really reasonably priced on Amazon and create the look of a breakfast sandwich you would buy at a fast food restaurant. Our quantities made 10 sandwiches. Let’s get started.

While we prepared these on our flat top griddle, they could also be made on a cast-iron or an electric flat top skillet.

First, we made the pancake batter, which consisted of two cups of the pancake mix, one cup of almond milk and one egg. I placed the egg rings on the hot flat top and sprayed them with canola oil spray. I poured the batter into each ring, 50% full, as the batter will rise. I then drizzled a little maple syrup in each one. I’ve since learned there are maple crystals we can use for this step, which we will try in the future. I used a small knife and loosened the pancake from each ring, removed the ring and turned them. Once the packages were done I set them aside.

Next, I shaped the sausage into mini patties and cooked them on both sides. No ring needed for this step.

Lastly, I placed the rings back on the griddle and again sprayed them with canola oil. Into each ring went a raw egg. I broke each yolk, let things harden up a bit and then used the same knife to loosen the edges of the egg. I removed the rings and turned each egg, cooking until done. We like ours with a slightly creamy yolk.

Now it’s time to assemble the sandwiches. All heat was turned off on the flat top. One pancake was placed on the flap top. Next was the sausage, then some American cheese, and lastly, the egg, topped with another pancake. The lid was closed long enough to melt the cheese.

These sandwiches are the perfect combination of sweet, savory and salty. If you have time some morning, give these delicious breakfast sandwiches a try!

The pandemic has made us hyperaware of many things, including the state of our homes, waistlines, and the way we interact with people.

As fall approaches, it’s an opportune time to cast any negative notions that may ...Read More