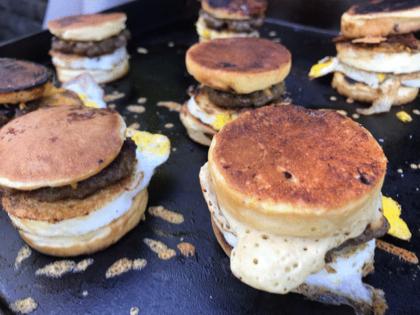 I recently purchased an outdoor griddle. This week I’m going to share with you the frustrating roller coaster I experienced getting the griddle set up, as well as a fantastic breakfast sandwich we made on the griddle, which can also be made on a cast-iron skillet on charcoal or your gas grill. But first, the short story of the griddle saga.

When I was a kid, I was always drawn to grilling and cooking. My first real job was as a paperboy for the Indianapolis Star. My second real job at the ripe age of 14 was working as a cook (yes, a cook) at the best restaurant in my hometown of Washington, Indiana, called Helphenstines. Helphenstines was a drive-in/dine-in restaurant owned by Jerry and Ina Helphenstine. This is where I learned that fried shrimp are done when they float and not to push down on steaks and burgers while they were cooking on the flat top griddle. Doing that obviously dries the meat out, though the cooking method of a delicious “smash burger” totally defies this principle, resulting in a caramelized, delicious burger. But I digress.

In terms of grilling outdoors, I always thought it was really cool when someone had their gas grill tapped into natural gas, meaning you don’t run the risk of running out of propane mid-cook. Back when I bought my home I had a patio poured, which was a perfect time to have a natural line installed for when I decided to get a gas grill, which I would then convert to natural gas, eliminating the need for propane tanks. Well, I never used it. Stay with me. I promise this will all make sense.

The outdoor griddles of today are fueled by propane gas. What a perfect opportunity to convert the griddle to natural gas and finally use the gas line I had installed 20 years ago. After some research I learned this was indeed something some people have done. I found the conversion kit at a local discount store and watched a number of YouTube videos on how to convert your griddle from propane to natural gas.

As I put together the griddle I had to remove the burners, which were installed at the factory, and replace the nozzles with larger nozzles due to the fact that natural gas isn’t as potent as propane. When the griddle was assembled, two of the burner screws were stripped, and the third burner screw just rotated without doing anything. Since I was dealing with flame and gas, I concluded (actually, my wife, Liz concluded) my soldering skills learned from building a metal tool box in eighth grade shop class — I got a B- — wasn’t going to get the job done safely. I hired a very nice guy who came over with saws and drills used on metal and converted the grill. We hooked it up to the 20-year-old natural gas line and excitedly pushed the battery powered “ignite” button. It was the moment of truth, 20 years of anticipation packed into one moment. Drum roll, please. The multiple clicking sound resulted in nothing. My line was dead.

Next brought on board was a plumber. He informed me that unless I “had money to burn” I shouldn’t consider running a new line under the patio. I asked what it would cost to have a line run just to the patio, but not under it. We would only need to go under a sidewalk. This would entail a new location for the griddle, but what the heck? Let’s do this. He gave me the estimate and we scheduled the time. The estimate hurt a bit, but it was something I could justify, as the savings of buying propane would cover the coast within a couple of years.

On the day of the gas line installation, I got a call from the installer. He confirmed he was to install a new gas line at the corner of the house. I reminded him we had received the estimate on running the line under the sidewalk to the corner of the patio. He then informed me that this was not the correct estimate, and that he would call me back with the correct estimate. Thirty minutes later he called with an estimate approaching $5,000. Yep, you read that correctly. Guess who has two thumbs and immediately decided to convert his griddle back to propane? This guy. (Please visualize me pointing at myself with two thumbs as I say that.)

Anyway, I’ve just realized I used almost all of my column space and need to be quick and brief with the breakfast sandwich. Here it goes.

My daughter, Madeline, wanted me to try these. They are a copy of a breakfast sandwich offered at an internationally known fast food restaurant. To make them as legitimate as possible, I went online and bought two packages of egg rings so the sandwiches would be sized properly. We made pancake batter and poured them on the griddle inside the rings. We then drizzled a little maple syrup onto the batter. After the pancake browned on the bottom, we pushed the pancake out and flipped it. We then cooked eggs in the rings. We broke the yolk, cooked it a bit, sprinkled the eggs with salt and pepper and pushed the egg out and flipped it. We then cooked sausage patties. Lastly, we assembled the sandwiches and added a piece of cheese. Once the cheese melted, we dug in.

The pandemic has made us hyperaware of many things, including the state of our homes, waistlines, and the way we interact with people.

As fall approaches, it’s an opportune time to cast any negative notions that may ...Read More

They are crying because they know that they will do everything right. Those who brave the virus will dress up as their favorite spooky entity or superhero, they will knock on neighbors’ ...Read More

There’s no sense in trying to avoid candy altogether during the Halloween season, but sometimes you need some sweets and treats that aren’t candy.

Prepackaged candy makes sense when you are handing out candy to trick-...Read More

As some of you know, this past year I decided to buy a pellet grill/smoker, which was a big deal (at least for me) as I had always used charcoal and wood. Today’s recipe was absolutely perfect for a pellet grill because ...Read More

I love pork chops. Liz, not so much. I think pork chops are a blank culinary canvas capable of taking on all kinds of flavors and textures. Liz thinks pork, unless smoked or stuffed with an interesting filling, is simply ...Read More