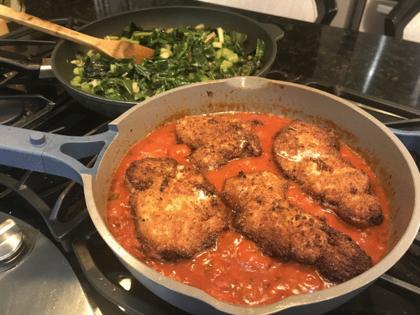 I love pork chops. Liz, not so much. I think pork chops are a blank culinary canvas capable of taking on all kinds of flavors and textures. Liz thinks pork, unless smoked or stuffed with an interesting filling, is simply boring. This recipe is definitely an exception, as it passed the “Liz test.”

There is a chef who I get a kick out of by the name of Nick Stellino. He is from Italy originally but has been here in the states for sometime now. This is his recipe, slightly altered with the smoking of the pork chops. I also added some gnocchi. Some of the amounts have been altered to fit our taste. He (Nick) uses his own pork rub, which is very similar to my pork rub recipe. He stated that he picked up this idea from the world of American barbecue. Heck, I’ve published mine a number of times. For all I know it’s my pork rub recipe. If so I am flattered. Either way, let’s get started.

Thinking of hosting a porch party? Erin Bellinger offers these two nuggets of advice: Keep it simple, and if people offer to help, let them! You'll have a better time if you don't have to do it all.

Ready to stock up on peaches? Here's some tips on buying and storing the summer fruit.

— Look for fruit with smooth, unblemished skin (shriveled means it's old) and a golden hue behind the reddish blush. Avoid ones that...Read More

PITTSBURGH — Summer is wonderful for all kinds of reasons, but especially because of all the different types of fruit available for the picking.

Die-hard "Schitt’s Creek" fans know how important games night is to David Rose. Quite specifically — for games night to succeed — a strict protocol must be followed:

Only six people can be invited (“Any more and ...Read More