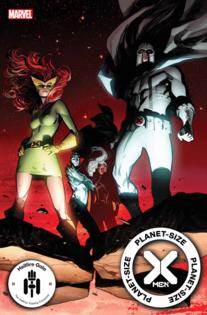 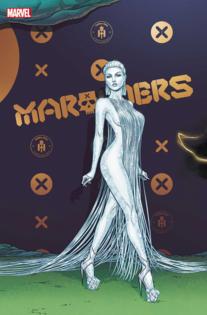 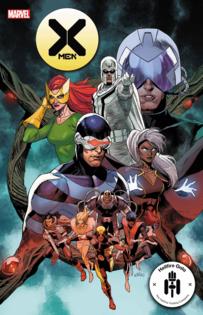 The party in question is the Hellfire Gala, a high-fashion, elites-only soiree hosted by Marvel’s mutants on the sentient mutant island Krakoa, based on the famous Met Gala. In a stunning show of Marvel’s confidence in the narrative, “Hellfire Gala” ran through all of the publisher’s 12 monthly X-Men titles in June, plus the 48-page “Planet-Size X-Men” one-shot.

And in so doing, changed the status quo of the entire Marvel superhero line.

Before I explain that, though, I need to explain this “Krakoa” business for those who don’t read X-Men books regularly. And the story of Where We Are Now and How It Came to Be is, like all things X-Men, ridiculously complicated.

The tl;dr is that Earth’s mutants have entered into a symbiosis with the living island Krakoa, first introduced in “Giant-Size X-Men” #1 in 1975. All of Earth’s mutants — heroes and villains alike — have resettled on Krakoa, currently in the South Atlantic, declaring it a sovereign nation. Krakoa grows plants from which various amazing drugs can be made, while all citizenry of Krakoa provide a smidgen of mutant energy for the island, which feeds on precisely that.

(At this point, I should explain The Nine Reincarnations of Moira MacTaggert and How the X-Men Defeated Death, but I won’t overload your brain with that today. You’re welcome.).

In the meantime, Krakoan wonder drugs are the island society’s economic backbone. Some extend human life, others cure Alzheimer’s disease, and so forth. There is great demand for these drugs, of course, but the Krakoans will only sell them to countries that recognize Krakoa’s sovereignty. A black market has sprung up to sell the drugs to noncompliant nations, but the Hellfire Corporation, run by Emma “White Queen” Frost, secretly runs that, too. The mutants, in addition to having their own country, are now crazy rich.

So, to celebrate their success, Marvel’s mutants threw a party. Diplomatic representatives of friendly nations were invited, as well as some from nations who are not so friendly, but may be persuaded. Some Avengers, like Iron Man and Captain America, attended. Actual IRL celebrities like Eminem, Conan O'Brien and Megan Rapinoe can be seen in crowd scenes, and Marvel Cinematic Universe mastermind Kevin Feige even had some speaking lines.

Each book featured its regular cast, depicting how they interacted with the party (or didn’t). These various viewpoints kept the concept fresh issue to issue.

One clever aspect was the creation of special outfits for all the mutant attendees, fashion statements (and sometimes questions) which would be at home at a Milan catwalk (and almost nowhere else). Emma Frost, always a fashion plate, had no less than three outfits, all of them as daring as her usual cleavage-baring costumes.

While not outsiders, the Hellions also crashed the party. If you’re not a regular X-Men reader, you might not know most of these characters — outside of Havok, who at least appeared in the cartoons, and Psylocke, who showed up briefly in “X-Men: Apocalypse,” played by Olivia Munn. But it was fun seeing them all get embarrassingly smashed, because what’s funnier than drunk superheroes?

Well, monkeys, I guess. Stephen Colbert. “Monty Python and the Holy Grail.” And about 100 other things. But still, it was funny.

Meanwhile, in “X-Men” proper, a new team was announced. (There hasn’t been a team with that name since the move to Krakoa in 2019, an absence now corrected.)

Marvel announced that the team would include:

— Jean “Marvel Girl” Grey: Double duh. She’s not the Phoenix any more, but she’s on O.G. X-Man and an Omega-level telepath and telekinetic.

— Rogue: Triple duh, especially given her popularity on the cartoon.

— Wolverine: Not the one you know. Logan’s clone/daughter Laura Kinney is also calling herself Wolverine these days. The original remains the star of “X-Force” and his own book.

— Synch: Not an especially well-known character. He can ape the powers of any nearby mutant, and spent hundreds of years in a parallel universe with Laura where time passes differently, and the two fell in love. He remembers it; she doesn’t. Long story.

— Sunfire: A Japanese pyrokinetic with a prickly personality. He was an X-Man for, like, 30 seconds in 1975. He’ll probably last about as long this time, because nobody likes him.

The team will consist of seven members, and Marvel allowed the fans to pick the seventh slot. (In-story, it was the mutants themselves who held an election.) The winner was:

While they would be the climax for most superhero-oriented parties, the new team announcement was just the warm-up. For the climax, the Hellfire Club promised “fireworks.” But they weren’t just ordinary fireworks.

For one thing, they were on Mars.

For another, they weren’t fireworks. They were a light show created by the X-Men terraforming the red planet.

Actually, it’s not the X-Men. Not precisely. Several familiar faces were involved in the project, like Magento (who boosted the magnetosphere and sped up Mars’ rotation, increasing gravity), Iceman (who provided, as you’d expect, a lot of ice) and Storm (who launched weather systems). But most of the exotic needs were filled by a new group of mutants from Arakko, who have taken up residence.

OK, I guess I have to explain Arakko now. Here’s the short version: Arakko is formerly four-fifths of Krakoa, long exiled to magical “Otherworld,” where its mutant population has grown to millions and formed an aggressive warrior culture. Arakko and its millions returned to Earth in the recent “X of Swords” crossover. They’ll be the ones living on Mars (thankfully not here), which they’ve renamed “Planet Arakko.”

Got all that? Moving on.

So now the Arakko mutants have declared their planet the capital of the solar system. They’ve established to all the major powers in the galaxy — the Kree/Skrull unity empire, the Kymellians, the Shi’Ar and more — to deal only with Planet Arakko for all things involving the Sol system.

So, at a stroke, Earth and all humans have been relegated to second-class status. How well do you think that will go over?

The fallout over Mars/Arakko isn’t the only problem exposed by the Hellfire Saga. It’s become obvious that Amahl Farouk, the Shadow King, is using the clemency granted all mutant supervillains on Krakoa to corrupt some of the younger mutants. Speaking of which, it’s also becoming apparent that younger mutants — with no real purpose and nothing to do — are ripe for succumbing to the dark side. Idle hands, and all that.

And worse, Nightcrawler and Legion (Professor Xavier’s son, who recently had his own TV show) have discovered that the spirit of Onslaught is alive and well on Krakoa, resurrected by unknown means and up to no good.

Gah! Now I have to explain Onslaught!

OK, he’s a bad guy who stirred up some trouble in the 1990s. But more than that, he’s sort of a Xavier/Magneto combo plate.

Dr. Nemesis, self-described Man of Science, said Onslaught is “a unique etheric chimera created from the combined psychic profiles of Professor X and Magneto. It is one of the most potent adversaries mutantkind has ever faced. It seems driven most pointedly by whatever unconscious desire the two men had, or have, for domination. And its boundless power is restricted only by its access to sustenance.”

Well, that doesn’t sound at all good. So drink up, X-Men. The Hellfire Gala may be the last party you have for a while.

“Shang-Chi and the Legend of the 10 Rings” arrives in theaters Sept. 3. If you think he’s an odd addition to Marvel’s line of mostly superheroes, you’d be right. And therein, of course, lies a tale.