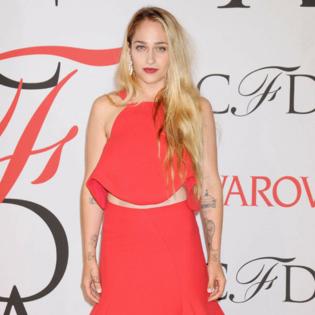 Jemima Kirke doesn't use her own relationship woes in her work.

The 37-year-old actress divorced Michael Mosberg - the father of her children Rafaella, 11, and nine-year-old Memphis - in 2019 but she insisted it wouldn't have been appropriate to draw on her personal experiences for her role in 'Conversations With Friends'.

She said: "If I'm playing a wife in a troubled marriage, I won't think about my own marriage because then I'm putting myself into it and that's not the job.

"No one's the villain here, no one's in the wrong or the right.

"It's a book that really lives in the grey area of relationships."

Although Jemima isn't interested in the sort of open relationships depicted in the show - an adaptation of Sally Rooney's best-selling novel - she can understand the appeal of polygamy.

She said: "There's no formula for how you love someone and there's no right or wrong.

"You can hurt people, but that doesn't always mean you did wrong by them.

"People who are in open relationships will love this. I couldn't do that, but I understand what they're saying."

The former 'Girls' star admitted she can be "moody" on set, but insisted all actors are the same.

She said: "Filming is kind of like summer camp in that you're just sort of thrown into a space with people you don't know but with similar interests and hopefully you click.

"Most actors, including me, are moody and want to get the job done."

Although Joe Alwyn plays Jemima's husband on the show, they don't have many scenes together because of their characters' troubled relationship so they spent a lot of time working on their back story when the cameras weren't rolling.

She added to OK! Magazine: "There's not much screen time with them alone so we don't necessarily get to see how they function as a couple when they're alone.

"That's something Joe and I had to create together and talk about but never really got to act it out."

The couple - who have daughter India, 10, and eight-year-old twins Sasha and Tristan together - married on 26 December 2010, but rarely celebrate ...Read More

The couple - who have daughter India, 10, and eight-year-old twins Sasha and Tristan together - married on 26 December 2010, but rarely celebrate ...Read More

Joe Wicks "didn't believe in marriage" when he was younger.

The 37-year-old fitness expert tied the knot with former model Rosie Jones - with whom he has daughter Indie, son Marley, and another baby on the way - in 2019 ...Read More

He passed from natural causes at his Beverly Hills ...Read More

Acting veteran Bo Hopkins has been killed by a heart attack aged 80 after appearing in classic films including George Lucas' 'American Graffiti', 'The Wild Bunch' and Oscar-winning 'Midnight Express'.

He died at Valley ...Read More

Ewan McGregor has insisted the 'Obi-Wan Kenobi' Disney+ series is just a "standalone" limited series for the time being.

The Scottish actor reprised his role as Jedi Master Obi-Wan Kenobi in the new show of the same name,...Read More