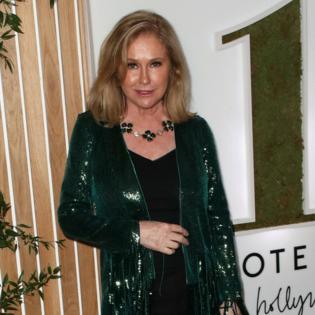 Kathy, 63, was unable to attend the blue-themed bash in honour of her grandson's impending birth but has vowed to be by Nicky's side in the delivery room instead.

Speaking to People, she shared: "I felt terrible that I could not be there. Nicky is easy. I fly in (to New York) for all the births. I'll be there holding her hand. It'll be in the next five or six weeks."

Nicky's older sister Paris, 41, threw a blue-themed baby shower in honour of the tot and posted pictures of the bash on Instagram, writing: "Hosted the most beautiful baby shower for my gorgeous sis... Can't wait to meet my baby nephew!"

After missing the bash, Kathy is hoping to hold her own celebration for Nicky once the baby is born.

She added: "I felt bad, but we're going to do a sip and see for her when she gets back."

Nicky, 38, is married to James Rothschild and they are already parents to two daughters, Lily, five, and Theodora, four.

The new baby will be the first boy for the couple.

They became engaged in 2014 during a holiday at Lake Como in Italy and they tied the knot at a lavish wedding in London's Kensington Palace Gardens a year later.

Since Nicky settled down, her sister Paris has also found love - she married businessman Carter Reum in November just months after they became engaged.

Sharon Osbourne has said that her daughter Aimee is "lucky" to be alive after escaping a fire.

The 28-year-old comedian - who has been dating reality TV superstar Kim Kardashian, 41, since October 2021 following her split from Kanye West - became a regular ...Read More

Kelly Rizzo wishes she could have "one more day" with late husband Bob Saget.

The 'Full House' star - who was found dead in a hotel room back in January at the age of 65 after suffering "blunt head trauma" - was married ...Read More

Alfie Allen is "in shock" over his Tony nomination.

The 35-year-old actor made his Broadway debut as menacing stranger Mooney in Martin McDonagh's play 'Hangmen' and has been nominated for a Tony Award for Best Featured ...Read More

Wendy Williams is "not in agreement" with a court-appointed financial guardian.

The 57-year-old star - who fronted 'The Wendy Williams Show' for over a decade until 2021 but is now in an ongoing battle with Wells Fargo ...Read More

Hayley Kiyoko and Becca Tilley appear to have confirmed that they are in a relationship.

The 31-year-old pop star and 'Bachelor Nation' alum Becca, 33, shared a Reel of themselves on Instagram which showed intercut clips ...Read More