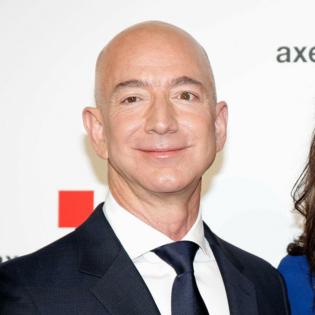 Jeff Bezos was moved to tears as he paid tribute to his father.

The Amazon founder grew emotional as he reflected on Miguel Bezos' "tough" experiences as a Cuban immigrant in America on stage at the Statue of Liberty-Ellis Island Awards.

The Statue of Liberty-Ellis Island Foundation shared a video of Jeff at the ceremony, who said in the clip: "Every immigrant who has come to this country, they all have their own unique stories. Fighting for a better life, hardships but they also end up having a belief in America.

"They think this place creates opportunity and it does.

"That's certainly the story of my dad. He came from Santiago, Cuba. He was 16. He spoke no English, he had to make his way. He had those tough experiences. I think in every immigrant you'll find a deep optimism and a deep resilience too.

"My dad is an intense hard worker. My dad is warm and he teaches an easy smile."

Jeff then teared up as he said he and his siblings could "not have had a better role model."

Miguel then came on stage and hugged and kissed his son, before the Foundation honoured him with the 2022 Statue of Liberty-Ellis Island Award.

The organisation wrote on Instagram: "We celebrated Miguel's incredible life story and his passion for education."

Miguel and his wife Jackie co-founded the Bezos Family Foundation - which promotes education and positive learning environments for children throughout the US - in 2000.

Elon Musk hopes Amber Heard and Johnny Depp are both able to "move on" from their defamation case.

The billionaire businessman dated Amber, 36, for several months after her split from Johnny, and Elon has now broken his ...Read More

Shanna Moakler is auctioning off her engagement ring from Travis Barker.

The 47-year-old model was married to the Blink-182 star between 2004 and 2008, and following his recent wedding to Kourtney Kardashian, she's now ...Read More

Jesse Tyler Ferguson and Justin Mikita are expecting another baby.

The 46-year-old actor and Justin, 36, have made the announcement via social media, with Jesse describing it as a "little bit of good news".

Ewan McGregor has "a lot to be thankful for".

The 51-year-old actor - who was raised in the Scottish market town of Crieff - has enjoyed a 30-year acting career that's taken him to Hollywood stardom, and Ewan appreciates ...Read More

Hilary Duff "lived in a bubble" as a teenage star.

The 34-year-old actress shot to fame as a child, starring in the hit TV series 'Lizzie McGuire' - but Hilary has now revealed that she wanted to walk away from her career...Read More

Camila Cabello is fulfilling a "bucket list" ambition by performing at the Champions League Final.

The 25-year-old singer is headlining the opening ceremony before the soccer game between Liverpool and Real Madrid, and ...Read More