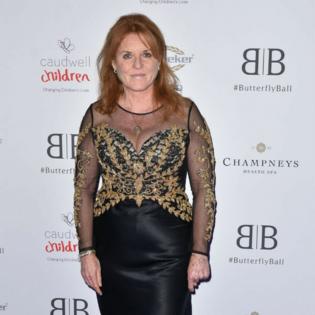 The 62-year-old author - who is the ex-wife of Prince Andrew - has announced she is set to pen several tomes, including three new young adult novels based on her own life, via publishers Serenity Press.

The Duchess of York - who has Princess Eugenie, 32, and Princess Beatrice, 33, with Queen Elizabeth's son - will open up about her own struggles with mental health and an eating disorder, as well as the loss of her mother Susan Barrantes, who died just one year after Princess Diana in a car crash.

Sarah said in a statement; "Young adults are perhaps the fastest-growing category of new fiction today. There's just something about adolescence -- with all its incredible triumphs and heartbreaking failures-- that makes it the perfect backdrop for powerful storytelling."

She added: "I wanted to share my story of growing up with anxiety and an eating disorder, along with witnessing firsthand the effects of generational trauma. For me, it is always present and it all started at the loss of my mother."

The first book, 'Demon's Land', is part of The Southport Series co-written by Michelle Worthington, and will arrive at the end of June.

Sarah released her debut novel, coming-of-age tale 'Her Heart for a Compass', last summer, and she's set to release part two in January.

The Sarah's Trust founder has recently spent time in Poland visiting Ukrainian refugees, and her "constant contact" with young people around the globe has proved inspirational.

She added: "With my charity work, I'm in constant contact with young people and I have so much empathy for everything they have been through in the past two years. They are a capable and compassionate generation and their help as consultants on this book to make sure we captured the essence of what it's like to be a teenager today was instrumental in the writing of the book."

Co-writer Michelle commented: "I was honoured to be asked to form part of this project and always enjoyed my brainstorming and writing sessions with The Duchess. I very much appreciate her warmth, professionalism and value highly her advice based on extensive research into her YA audience.

"She went out of her way to articulate and clarify exactly what messages she wanted to share in the series based on her personal experiences and took the time to listen to mine. Her personalised approach challenged me to improve the manuscript and become the best support I could be to her vision. This series is a testament to her courage."

Halsey claims her record label won't "let" her release a new song until she goes viral on TikTok.

The 27-year-old singer is keen to bring out the track as soon as possible but has accused Astralwerks/Capitol Records of ...Read More

The 36-year-old star portrayed Holly opposite Jennie Garth as her older sister Valerie in the CW series, which ran from 2002 to 2006, and...Read More

Courtney Love has recalled how Johnny Depp once saved her life.

The Hole frontwoman insisted she didn't want to make "judgements" amid the 'Pirates of the Caribbean' actor's ongoing defamation case with his ex-wife Amber ...Read More

Sir Mick Jagger thinks Harry Styles "just has a superficial resemblance" to his younger self.

The 'As It Was' hitmaker has often been compared to the veteran Rolling Stones frontman and although the 78-year-old rocker can...Read More

Kourtney Kardashian and Travis Barker have got married - again.

The couple - who exchanged vows in a "practice" ceremony in March before making their union official in a Santa Barbara courthouse last weekend - tied the ...Read More

Justin Long has confirmed his romance with Kate Bosworth.

The 43-year-old actor has been linked with the 'Blue Crush' actress for the last few months and he has now clarified for the first time that she is his girlfriend ...Read More