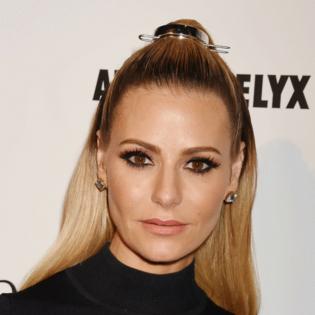 Dorit Kemsley says the thieves who broke into her house are still at large.

'The Real Housewives of Beverly Hills' star admitted that she doesn't "believe" that any of the individual's who stole millions of dollars worth of her belongings have been caught by the cops while on 'Watch What Happens Live' with her co-star Kyle Richards on Wednesday night (11.05.22)

After being asked if any arrests had been made in connection the incident by Andy Cohen, the 45-year-old reality television personality told his talk show: "No, I don't believe so."

The incident - which took place in October as her husband Paul "PK" Kemsley and their seven-year-old son Jagger and five-year-old daughter Phoenix were at home - involved three unidentified men breaking into her Encino home, according to the Los Angeles Police Department.

During the premiere of season 12 of the Bravo reality show, the fashion designer recounted the harrowing moment of being held at gunpoint and "begging" for her life.

In her confessional, Dorit said: "Please, please. I have little babies. Please, I'm a mother. Please, I beg of you. My kids need me."

While on the chat show, Dorit admitted to Andy that reliving the moment by watching the episode caused "resurfacing" of traumatic memories.

She said: "Obviously, it's a particularly difficult time because I'm reliving it, and there's a lot that's resurfacing. But, you know, I'll get through it. I know I will."

Dorit added that she "grateful" her family came out "safe" after the ordeal, saying: "first and foremost, I'm so grateful that myself and my family are safe."

She also explained why she "hadn't before" turned on the security alarm because of her small kids.

Dorit told the 53-year-old executive producer: "I have small children. They get up in the middle of the night, and usually come to my room. If I put the alarm on -- and the reason why I don't, or hadn't before -- is because they could drift downstairs and then the alarm would go off."

Dorit then repeated how "grateful" for how all turned out because it could have turned out differently.

She said: "I'm grateful that I was able to be level-headed because I look back and I think, 'My God, it could have gone a hundred different ways.'"

Kourtney Kardashian and Travis Barker have got married - again.

The couple - who exchanged vows in a "practice" ceremony in March before making their union official in a Santa Barbara courthouse last weekend - tied the ...Read More

Justin Long has confirmed his romance with Kate Bosworth.

The 43-year-old actor has been linked with the 'Blue Crush' actress for the last few months and he has now clarified for the first time that she is his girlfriend ...Read More

Queen Elizabeth won't take the royal salute at Trooping the Colour for the first time this year.

The 96-year-old royal - who has been suffering from mobility issues in recent months - historically marks her official ...Read More

Prince Harry's memoir is embroiled in "some uncertainty" about when it will be released.

The Duke of Sussex announced last July that he was writing an "intimate and heartfelt" autobiography and although Penguin Random ...Read More

The 34-year-old model - who has Isaac, two, and four-month-old twins Roman and Malachi with her husband Justin Ervin - had a speedy labour with her babies but "blacked ...Read More

The 63-year-old opera singer and his wife Victoria will be among the guests when the couple tie the knot in front of family and friends in ...Read More