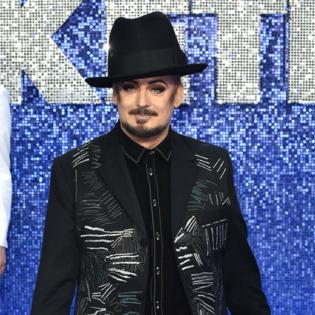 The 60-year-old pop singer - who shot to fame in the early 1980s - has claimed that modern-day musicians are boring compared to the stars of the past.

He said: "I think it's always hard to be interesting. I think pop music has got quite dull, I have to say.

He also suggested that they've become too predictable, saying they "just kind of dial it in".

He told MailOnline: "Things that have got a bit of an edge to them. That's what we're looking for. We don't want pop stars to just kind of dial it in and give us what we expect. I'm very objective about it. I'm a songwriter, that's what I do."

The Culture Club singer - whose real name is George O'Dowd - previously claimed that "modern production" has ruined the pop scene.

He hit out at "big choruses" and "studio trickery".

He said: "We grew up in that era where people wrote melodic songs. When I was a kid I was listening to stuff from the fifties and sixties and seventies.

"A lot of modern production has big choruses now and studio trickery. When it comes on the radio I think, 'This will be great when it finishes.'"

Meanwhile, the pop icon previously revealed that he was too "engaged chemically" to take part in Live Aid.

The singer was keen to help raise money to fight famine, but was in no "fit state" on the day of the fundraising initiative.

He explained: "I messed it up. I was otherwise engaged chemically.

"I mean, I think it was a stroke of luck that we didn't do it because I wasn't in a fit state to do it."

The Grammy Awards have been rescheduled for April 3 in Las Vegas.

The ceremony was originally scheduled for January 31 in Los Angeles, but the event is now set to take place at the MGM Grand Garden Arena, which is inside ...Read More

Daniel Radcliffe is set to play 'Weird Al' Yankovic in an upcoming biopic.

The 32-year-old actor - who is best known for playing Harry Potter in the money-spinning film franchise - will star as the Grammy-winning musician...Read More

Cate Blanchett thinks society has become "terrified of the truth".

The 52-year-old actress plays a psychoanalyst who becomes involved with a circus mind-reader in 'Nightmare Alley', and although the film is set in the ...Read More