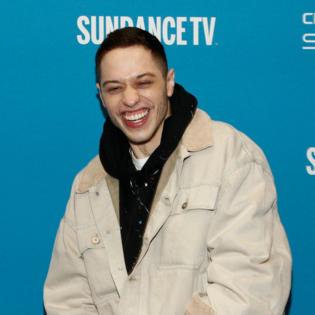 A source said: "Kim's family absolutely adores Pete and welcomes the idea of their relationship with open arms.

"Kim radiates when Pete is around and the family really takes notice of that and respects Pete for bringing out Kim's best self."

The brunette beauty - who has North, eight, Saint, six, Chicago, three, and Psalm, two, with Kanye West - "adores Pete's sense of humour" and their romance has gone from strength to strength over recent weeks.

The insider told 'Entertainment Tonight': "Kim and Pete are always laughing together and are constantly in hysterics.

"Pete brings out a side of Kim that she loves. She adores Pete's sense of humor and their chemistry is on another level. Kim likes that he is so authentically himself. He's also really sweet and always puts Kim first. They get along wonderfully and share a really special bond."

Kim and Pete have split their time between Los Angeles - where the reality star lives - and New York - where the comedian lives - over recent months.

And despite the frequent traveling, their relationship is progressing serenely and Pete sees Kim as being a "supermom".

The source said: "It's actually been really fun and easy and there's no pressure.

"Pete loves that Kim is such a great, hands-on mom and also a boss. She has created an empire and Pete really respects that she has been able to balance multiple successful businesses and a stressful divorce all at the same time.

"He admires her class and thinks she is a supermom."

Kristin Davis plans to use 'Sex and the City' as a "teaching tool" for her kids.

The 56-year-old actress played the part of Charlotte Goldenblatt in the iconic TV series, and she thinks it could provide some valuable life...Read More

Bella Hadid hasn't had a stylist for the last two years.

The 25-year-old model has struggled with anxiety amid the pressures she's faced during her career, but Bella has become much more philosophical about her style over...Read More

Jamie Lynn Spears has refused the chance to go on tour to promote her new memoir.

The 30-year-old actress - who has recently been involved in a war of words with her sister Britney Spears - was approached about a book ...Read More

Tess Holliday has "regressed" in her anorexia recovery.

The 36-year-old model revealed she was diagnosed with the eating disorder in 2021, and she's now confessed to suffering a setback in her recovery.

Tess said in an ...Read More

Britney Spears felt "so sad" when she split from Justin Timberlake.

The pop star split from Justin in 2002, after three years of dating, and Jamie Lynn Spears - Britney's younger sister - has recalled the blonde beauty ...Read More

Kylie Jenner has reportedly landed a restraining order against an obsessed fan.

The 24-year-old make-up mogul has managed to get a restraining order against Jrue Mesgan, who has repeatedly tried to approach her mansion in...Read More